Couldn’t make it to the Hungarian GP?  Here’s a taste of what you might have seen had you been lucky enough to have had that boarding pass..

Click on the first image to open the gallery

The trip began well, with a delay whilst a punctured tyre was replaced on our Airbus 319/320. That’s Mark Slade in the foreground, former race engineer to Kimi Raikkonen and now Pastor Maldonado’s right-hand-man. The bus took us on a nice trip around Gatwick airport, although it was a bit crowded and stuffy in there as time wore on

Upon arrival at Hungary’s Ferenc Liszt Airport, Felipe Nasr was quickly engulfed by F1 fans, all keen to hear the latest on his new Sauber contract

Five minutes’ walk from the main terminal stands this tranquil aircraft collection from former times. A nice touch, I think

When you’re losing your way to the hotel in downtown Budapest after a long, slow day, it’s always good to follow a Red Bull-liveried hot wagon. It duly led us through the backstreets, around the congestion, to our hotel door

This Elliott Miller, an Aussie backpacker I met at the airport. He and his mates have so far done the Austrian, British and Hungarian GPs plus the Cardiff and Lord’s Ashes matches. Good to see he’s wearing an “English cricket RIP” tee-shirt, too

Speaking of back-packs, which Ferrari team member lucked in to number 27? Jonathan Giacobazzi, of course – seen here checking in to the hotel on Wednesday evening

Thursday. Early. Very early. The paddock is deserted but ready to roll

The organisers are celebrating the race’s 30th anniversary this year and have accordingly lined the walkway to the F1 paddock with pictures of former winners. Nelson and Nigel caught my eye, if only because that was the one and only time they wore those particular Honda shirts. Note the cool epaulettes. I think this picture was taken in 1986 at Tochigi, Honda’s banked circuit and factory. There was no Japanese GP back then, so we demonstrated the FW11-Honda on the oval…and promptly destroyed the tyres. Quite why this was chosen for the display in Hungary remains a mystery

My home for the four days in Hungary. Nice view of T13 – and also of the exit from 12, which is surprisingly narrow and bumpy. In the background on Friday we could also see the aftermath of Sergio’s nasty accident in the new Force India (caused by a right-rear suspension failure) 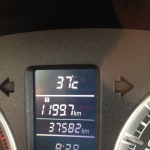 The temp gauge on my hire car was pretty accurate throughout. It was hot in Hungary – and even then the F1 Pirellis were relatively hard (with a very small operating window)

The Hungarians from Day One have always coned-off a special hard shoulder lane for F1 people. The fun bit is jinking through the “chicane” from the middle lane without touching a bollard…or lifting…

Hungary’s Ferenc Szisz is remembered at the circuit entrance gates as the winner of the world’s first Grand Prix – in Dieppe, France, in 1906 (in a Renault). This car actually looks more like a 1908 Merc. Sort of. I suspect Doug Milliken would be impressed by those camber angles

You can remember anniversaries in a million ways but this for me is the most elegant: a nice square of white chocolate

Just when I thought that Peter Burger of Arai was the only F1 person to use automotive transport more than he does aircraft, I found this Merc in the hotel car park. The stickers actually look quite interesting in layered format – easier than all that scraping and peeling…

Apparently Michael Jackson always used to stay at my hotel in Budapest – thus this tree opposite.

I love the lobby of the Four Seasons hotel in Budapest. Built in 1906 (as an office structure), this was actually the carriageway for horse-drawn vehicles before it was covered over, filled with a piano bar and given new life

The action begins. Jenson says hi to his fans on the circuit that gave him his first win

Hungary is excellent for corner- and car-watching. I took this with a standard iPhone5. Imagine what I could do with a decent camera! Ha ha.