Now about to embark upon his second full season of European racing, America’s Conor Daly won in karts and Star Mazda before splitting his time between Indy Lights and the GP3series in 2011.   He seems likely to join the GP3 Champions, Lotus GP (or ART, as they were formally known) for 2012  and spoke to me on-line from his home in Indiana after his first major test with the team.

Alfonso de Orleans is not just your average, championship-winning GP2 race team owner.  Educated in the US and England, fluent in English, Spanish and Russian and a nephew of the King of Spain, Alfonso resides in the family castle, complete with PGA golf courses and vineyards (suitably engineered to the 21st century via solar panels and internal water systems) near Jerez de la Frontera, a region in south-western Spain known not only for its sherry production but also for its F1-spec circuit.  From here he also runs the efficient, tightly-knit GP2 team he calls Racing Engineering, living the racer’s life, 24/7.  As he said when we met recently for SpeedTV.com, “My family connections allow me to open some doors but I still get the same ‘No’ answers as everyone else!”.  Racing Engineering has also provided a stepping-stone for some very talented racers over the past few years, including double World Champion, Sebastian Vettel, and the current Lotus F1 Team Principal, Eric Boullier.   “Ah,” he says, staring intently.  “But there is one driver out there who impressed me just as much as Vettel.  It’s very sad that he’s not in F1.”  Who is this driver?  Press play…. 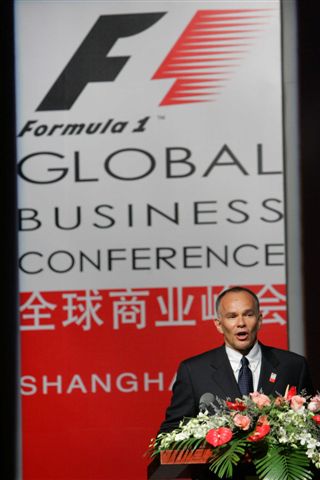 Born in the UK (1952) but raised in Sydney, Australia, Peter became Press Officer of the Australian Automobile Racing Club (AARC) at the age of 17 and played an active role in the organization of the famous Warwick Farm circuit near Liverpool, Sydney.  At that point he also began writing for various magazines around the world, including Australian Motoring News and Autosport (UK).

After moving to the UK in 1972, Peter wrote for Competition Car magazine and was appointed Sports Editor of Autocar magazine in 1975.  He went on to win five international awards for his writing.  He also quickly diversified into F1 driver and team management, working with Frank Williams from 1978 onwards (developing Williams’ new Saudi sponsorship) and with drivers Carlos Reutemann and Nigel Mansell.  Reutemann went on to finish runner-up in the 1981 World Championship and Mansell to win the title in 1992.

Peter joined Williams full-time in 1985 as Manager of Sponsorship and Public Affairs but switched to Ferrari in 1989 to manage their UK F1 facility.  He then returned to Williams as Team Manager in 1991, winning both the Constructors’ and Drivers’ World Championships.

Turning to TV, Peter reported for Sky Sports from 1993-97 and joined Fox Sports Net as their F1 specialist in 1998.  Predominantly under the Newscorp banner, he presented F1 on TV through to 2009, working for Speedvision, SpeedTV, HD1 (Australia) and FOM TV.  Peter was Grand Prix Editor of F1 Racing magazine from 1997-2009 and today is the F1 columnist not only for Japan’s biggest selling motoring weekly magazine, AutoSport, but also for the world’s largest on-line racing magazine, GPWeek.   He also hosts of the ground-breaking 60min F1 webcast weekly chat show, The Flying Lap; and is a regular contributor to SpeedTV.com.  In 2011 Peter was ranked the world’s number one F1 journalist by TwitterAllStars.

Notes from the Barcelona testing 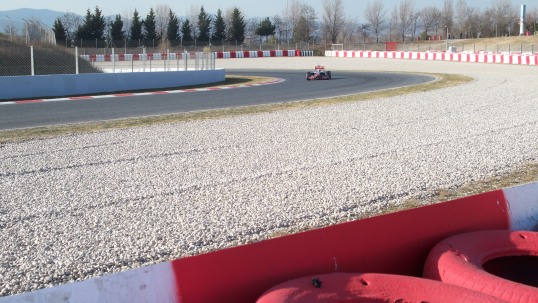 Lewis Hamilton in Turn Four – perfect use of steering and throttle, plus the correct minimum speed, gives him a straight car mid-corner. The rest, from the point, is a piece of cake

Bruno Senna at Turn Four in the Williams: mid-corner, he has managed to convert initial understeer into oversteer. Lovely to watch but lots of time going away here

Barcelona looks lovely in the late winter, and so it is that 2012 F1 cars gleam in the yellow sun, starbursts of florescent orange, or a deep aquatic blue suddenly catching the shaded eye.  For all that, I actually found it quite difficult to see the cars in action on Tuesday, February 21.   I headed straight for Turn Nine of course, because I love to watch F1 cars swallowing blind, fifth-gear corners, but I came away confused.  Lewis Hamilton flew through first, in that chrome-and-orange -“No plans to change the nose at this stage” – McLaren – and he was impressive enough: he tore into the corner without a lift in fifth, then grabbed fourth two-thirds of the way through it, as the tyres scrubbed away speed.  Astonishingly, though, Nico Hulkenberg , to my eye, looked every bit as good at this point of the circuit in the Sahara Force India – as did Fernando in the Ferrari.  It was only when Bruno Senna appeared in the Williams FW34-Renault, car understeering pretty much from entry to exit, that I could see the first three in any kind of relief. On the plus side, they were all mind-blowingly quick – quick, neat and very, very tidy. END_OF_DOCUMENT_TOKEN_TO_BE_REPLACED

Following a strong 2011 season, in which he scored a win and four podium finishes in the GP3 Series, plus an F3 win at Silverstone, Britain’s Alexander Sims was recently contracted to the prestigious McLaren Young Driver programme. We talk to him about that – and about his recent ascent of Mt Kilimanjaro, a climb that enabled him to raise £8,000 for the Henry Surtees Foundation.

In an interview with Peter Windsor for Speed.com, Valtteri Bottas, the stunning new Finnish star, talks about his career to date, his decision not to race GP2 in 2012 and his feelings prior to making his European F1 driving debut in Barcelona this week. Bottas has also chatted to us live on The Flying Lap just after clinching the 2011 GP3 Championship in September  – download from http://smibs.tv/theflyinglap