I’m very pleased to announce that we are auctioning a number of unique F1-related items in aid of charity.  The catalyst for the fund-raising is a little girl I know who is battling cerebral palsy.  She plays in the school band, she laughs and screams with the others…but most of the time she’s either in a wheelchair or walking with splints. In order to raise money for her upcoming (very expensive) operations and treatment, I approached several of my friends at the British GP last year.  The question was simple: could they please donate a personal item to auction in a good cause? I told them about nine-year-old Caya Newman, who lives near me, and I told them of  our plan, together with CharityStars and Bonhams, to display the items on-line initially (for global bidding) and then to auction them at an event in the gorgeous classic car showrooms of Joe Macari (www.joemacari.com). The items will go to the highest bidders, be they on-line or “live” on the night.

The response from the drivers and several team people was brilliant – as you will see if you go to the auction site via the following link:

And I was very touched by the trouble taken by all the F1 people. Virtually all of them are obligated to other charity commitments via their teams and are therefore under a lot of pressure not to support one-off fund-raisers like this. The Ferrari drivers, for example, are specifically obliged to centralise all requests through their PR/media department, so  I hope I’m not dropping Seb and Kimi in it when I tell you that both of them asked me to see them immediately after specific races in order to give me signed items within a few minutes of climbing from their cars – before anyone could stop them, in other words.  Lewis Hamilton  signed a pair of his 2016 gloves but has also gone to the trouble of having them framed; Damon Hill wanted to ensure that the overalls he gave me were from his World Championship-winning 1996 season; Daniel Ricciardo’s overalls are from 2014 – when he began to win; and Pirelli, brilliantly, have been supportive from Day One.

I have no idea how much we’ll raise – auctions are always a bit of an unknown –  but I’m hoping it’ll be enough to help not only Caya’s family but also two other charities (namely WellChild, who support the families of sick children) and Damon Hill’s Halow Project, which supports those with learning disabilities.

I’m hoping, too, that we can make this an annual thing – a chance to help some kids, to have a nice party at Joe’s and to enable some very personal and authentic F1 items to be out there in the bidding world.

I’d like to say a very big thankyou to all the people who have contributed items for auction and also to Pirelli, Joe Macari, CharityStars (who have put together the on-line aspect of the auction), Bonhams, WellChild and Halow.  And also to Caya Newman for being such a star. That’s her on the right, with Jack Windsor very cheekily sitting it out. 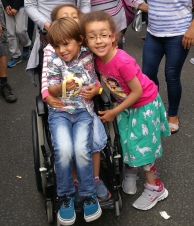