Notes from the Singapore paddock

Freshly-ironed Dunlop blues for SJYS on this special occasion: 50 years since the last Goodwood F1 race

Richard Attwood – 50 years on from that shunt in the Belgian GP: “I was driving the Parnell Lotus-BRM. Lost it on the Masta Straight in the torrential rain. Had the brakes on, while I was spinning, for about 600 yards. Eventually ended up wrapped around a tree. Luckily a spectator or marshal dragged me free. A few burns but nothing too serious…”

The boys are back in town

Original interior of the Thunderbird. Lots of room for her to sidle up next to you…

Karun Chandhok to Brian Redman: “So what sort of speed were you doing with the 917s at Spa?” Brian to Karun: “Just on 214mph going into the Masta Kink.” Karun: “Say again?”

Strange relics were discovered beneath the surface…

…while Chris Rea ponders the broken gearbox on his lovely Lotus 6. Even Michael Buble recently turned down a cover of “Driving Home for Christmas”, admitting he couldn’t add to CR’s original

No, this isn’t a telephone exchange. It’s DeLonghi’s way of shortening the queue for lattes at their ’60s cafe bar

Sir Douglas Bader was in his element…

…while, regardless of age, nice red sports cars always look as delicious as ice cream 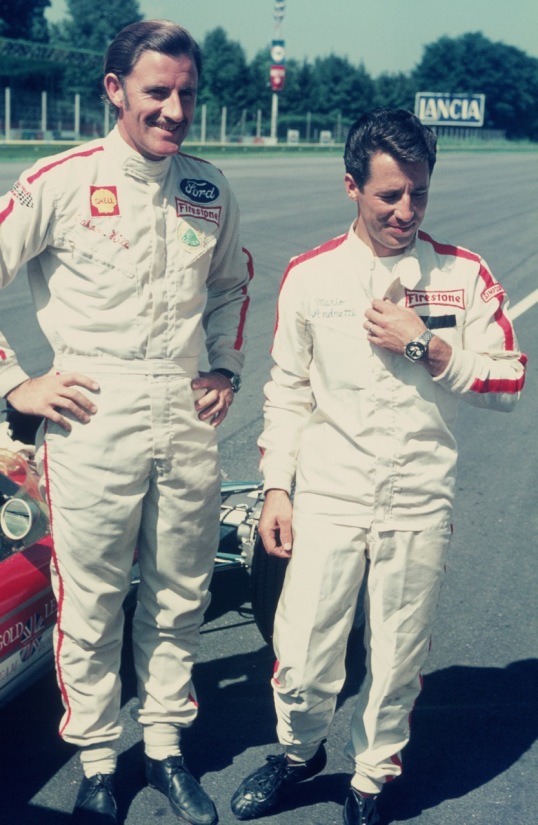 As the official photographer to Team Lotus in the 1960s, Peter Darley, like the photo-journalist, David Phipps, was close to both Colin Chapman and the Team Lotus personnel.  He was at Monza in 1968 when Mario Andretti (and Bobby Unser) were scheduled to make their F1 debuts for Gold Leaf Team Lotus and BRM. He recently sent us his recollections:

Colin asked me to collect Mario Andretti and Bobby Unser from the airport. No-one knew which one – Linate or Malpensa? Anyway, I researched which was used for transatlantic flights and rolled up. Bobby was driving for BRM, Mario for Lotus. I found them both and we piled into my Fiat 124 hire car. After a few kms, Mario decided he wanted to drive, although Bobby wasn’t so sure, muttering things about crazy Italians. It was thereafter a drive of a lifetime: Mario had the pedal to the metal for the entire journey. When we reached Monza, Mario and Bobby found they had no passes but a few words from Mario to the local police resulted in the gates opening and the crowds parting as if we were going through the Red Sea. We were there.

Unfortunately all this was in vain: since they had competed in the US the previous day, Monza’s Race Director, Snr Baccagalupi, refused to allow them to race in Italy under the 24 hr rule. We knew better, of course: with Mario a definite contender for the pole and a possible win – even though this would have been his first F1 race – it was in Ferrari’s interest to keep him away. He made up for it by taking the pole for what was his first race – the 1968 US GP at Watkins Glen.

I took these photos of Mario at Monza that year – (above) with his team-mate for practice (Graham Hill); and in the high-wing Lotus 49B with Colin Chapman.  (Photos copyright Peter Darley) 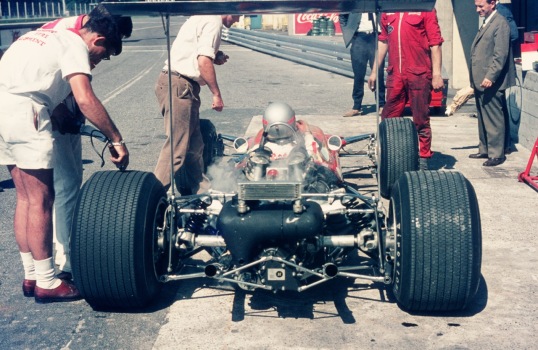 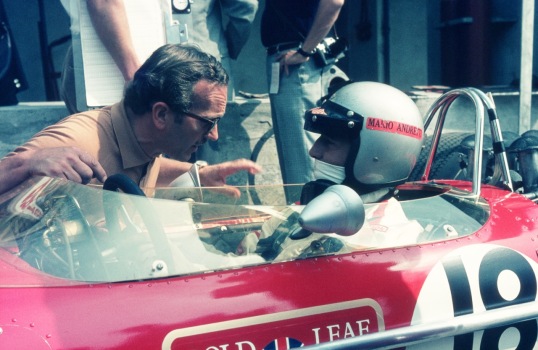