From Sebring back to the UK via a quick test day at Indianapolis: for Jim Clark, the 1964 season was now gathering pace. Next on the agenda was the March 30 non-championship F1 race at Goodwood, that gorgeous circuit on the Sussex downs on which he first tested the Aston Martin F1 car late in 1959. Jim had subsequently won prodigiously there in Formula Junior, and had had a lot of fun too with John Ogier’s Aston Martin Zagato – not to mention the Ecurie Ecosse Tojeiro (crashed heavily by his team-mate, Maston Gregory in 1959) and the Border Reivers Lister and Aston DBR1 – but this was his first chance to race an F1 car at Goodwood. It was also his first race at Goodwood since 1962, although he had tested there in 1963.  As at Snetterton, he would drive the modified Lotus 25 on 13in wheels and “donut” Dunlops. Also on Jim’s race card on that Easter Monday: his third British race with the Ford Lotus Cortina. 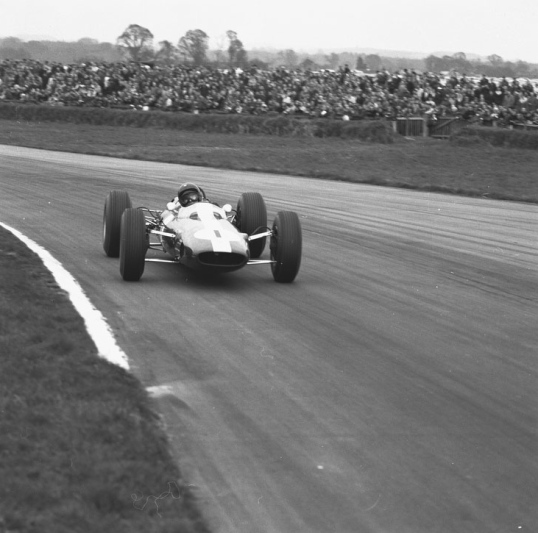 In front of a packed 1964 Easter Monday crowd Jim Clark drifts to victory in the 42-lap “News of the World” Trophy race for F1 cars at the wheel of Lotus 25B/R6. Note the wider Dunlops now mounted on 13in wheels (relative to the 15in wheels and narrower tyres used in 1963). Jim inherited his win from Graham Hill, who retired his new BRM with two laps to run, but even so was obliged to race for half the distance without a clutch 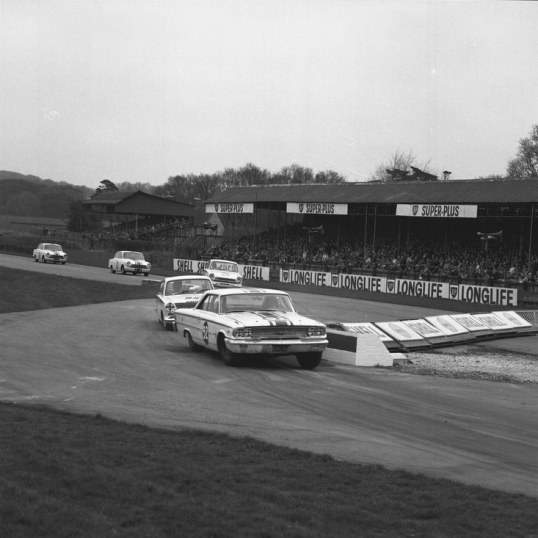 Sally Stokes (Swart) in the Goodwood pits with that Heuer stopwatch Jim gave her after the Geneva Show. It was cold on Easter Monday, 1964