…or “Good Morning” in Malay.  Join me and my colleague, Craig Scarborough, as we drive to the Sepang F1 circuit on the Thursday before the Petronas Malaysian GP:

Plenty have been the changes in F1 helmetwear over the past few months – particularly with Lewis Hamilton using his customary Arai to win in Melbourne before switching to a Bell helmet for practice in Malaysia and China. At Ferrari, the bastion of Schuberth since the early Michael Schumacher days, Sebastian Vettel is remaining loyal to Arai – and Schuberth have in turn now switched their team supply to AMG Mercedes Petronas. Anyway, before it gets too complicated, here’s the list as it stood in Malaysia:

Tighter F1 testing restrictions – both in the wind tunnel and on the track – have characterised the early phase of 2015.  In the very short break between the first and second winter tests, Craig Scarborough and I discuss some of the key F1 developments.

We loved you, Leo

I first Leo Geoghegan at the 1963 Australian Formula Junior Championship meeting at Warwick Farm. I watched from the Creek Corner bank with my brother and my Dad. I was but a kid. I fell in love.

The black Lotus 22 was gorgeously low-slung. Its chromed suspension glistened in the spring sunshine. The downchanges, on every passing lap, were impeccable and identical. “Total Team Dvr: Leo Geoghegan” it said on its flanks. For his part, Leo was all straight, bare arms, black polo shirt, black helmet and split-lens goggles. Both the car and the driver, in living harmony, were immaculate.

Leo duly won the trophy, and the garland, and later, as the sun was fading over the Farm, we walked into the paddock, where the mechanics were packing up and the cars were being slowly pushed up their trailor ramps. I spied the Total Team flags. I ran to the tent, fearful that I would miss him.

The Lotus 22 was adorned by its garland. I peered down at the red bucket seat, the matching red steering wheel, the little gear lever on the right, complete with its Lotus badge. I drank it in. I was intoxicated. No-one could sit so low in the car, so reclined in the car; no-one could drive with so much elegance.   The whole was perfect and the details were better still. I had found my benchmark.

Then I saw Mr Geoghegan. He was drinking from a plastic cup. He was still wearing his polo shirt – complete, I now noticed, with Total badge. He was laughing with friends (his brother, Ian, I later realized, and David McKay). I nervously proffered my race programme. I could find only a blue Biro that I’d dropped during the excitement of the race. Leo asked me to hold his cup. I remember thinking how cold it was. He signed the cover, added “Lotus 22” below his name, and thanked me. The moment was captured forever in my autograph book. 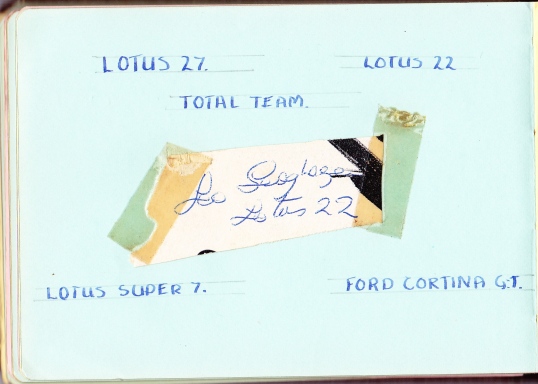 That summer, as a new member of the Total Racing Team Club, I received a Christmas card from Team Total, signed by Leo, Ian and Frank Matich. I still have it. And soon Dad’s Zephyr was resplendent with Total Team “racing stripes” – horizontal strips of blue, white and red. I was a part of the family. I was a Geoghegan fan of immense proportions.

His golden years, I think, came shortly afterwards. The Geoghegans were Lotus dealers, based in Liverpool. As such, they imported the latest editions of what was then the world’s best racing machinery and those of us who saw it knew that we were a part of something special. The 22 was replaced by Leo’s beautiful monocoque Lotus 27, the 27 by the 32 – now finished in equally-alluring white, with Total Team stripes, and then Castrol stripes, along the flanks. Nomex replaced the polo shirts, a Bell Star the Magnum. Still Leo was the svelte stylist – the fast racing driver who made it look gracefully but absurdly easy. I first saw the 32 up at Craven A corner at Catalina Park. I was struck by the contrast between the delicate beauty of the car and the harsh railway sleepers “protecting” the rock wall. Up against the F2 Brabhams of Greg Cusack and Bib Stillwell, Leo gave us some of the best single-seater racing (and driving) ever seen in Australia. You trembled with fear a few minutes before the flag-drop – and then they were upon you, darting through the Warwick Farm Esses, teasing the Armco barriers.

Next was the Jim Clark era: Jim’s Tasman cars were based at the Geoghegans’ garage over the Warwick Farm week – and Leo bought Jim’s 1966 race-winning Lotus 39. I’m usually appalled by drivers who butcher famous cars with new colours or engines or wings but nothing Leo did was bad. After a race or two with the Climax (below), he fitted a big Repco V8 into the back of it (top). The result was a gem of a car – the Lotus 39-Repco.

I could go on. Leo raced a Lotus 59 in Castrol white, also some touring cars, sports cars, single-seaters and even Lotus 7s. He was a major part of the Australian racing fabric. He set the bar in terms of preparation and presentation. He was a gentleman and he was a racer.

And he filled my still-young life with images that will never fade – with something that touched the centre of all that I love about motor racing but which, in later life, became impossible to reproduce.

Perhaps it was because I was a kid.

Perhaps it was because it was Leo. 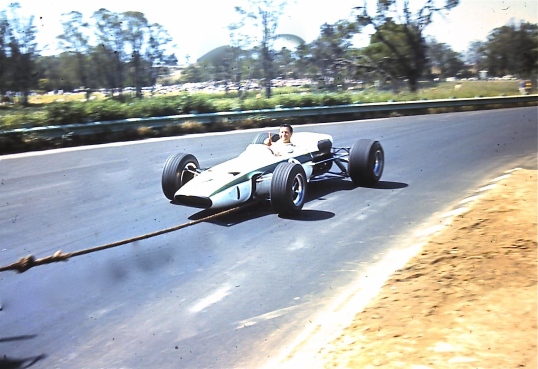