The British GP celebrations – as they really happened in 1965

My colleague, Peter Darley, was quickly in touch last week after we posted the summary of Jim Clark’s stunning 1965 British GP victory. I’m indebted to him for the gallery below. As the official photographer to Team Lotus in the 1960s, Peter was invited onto the British GP podium “float” in 1965. He clicked away as, first, the winning Lotus 33B was wheeled up onto the flat-top and then as Jim donned Jim Endruweit’s pullover before receiving the garland and trophy. “Actually, I was holding Jim’s favourite cardigan,” recalls Peter, but Jim Endruweit offered him his sweater while I was busy taking photos. When Colin saw the cardigan in my hand he said ‘Good.  I’ll have that. It’s a bit chilly up here…’ – which is why you see Colin wearing Jim’s cardigan and Jim Clark the baggy Endruweit sweater. Jim E sat at the front, looking a bit cold…” 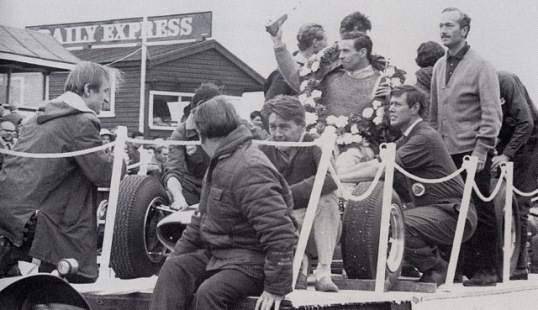 Here’s Peter at the head of the victory group, recording history. (Peter has already published two superb books that no serious enthusiast should be without – Jim Clark – Life at Team Lotus and 1965: Jim Clark & Team Lotus: the UK races.  And he has a new book due out shortly, juicily entitled Pit and Paddock.)

To enter the gallery, click on the first image – but please note that all the photographs are the copyright of Peter Darley and cannot be reproduced without his written permission.

Pre-race, and Jim looks a little tense as he sits on the pit wall with team-mate Mike Spence. He wears his favourite cardigan – the one Sally Stokes gave him for Christmas in 1964

Jim controlled the race in the Lotus 33B-Climax until the 32-valve engine suddenly began to lose oil pressure. Graham Hill closed the gap…

Chief Mechanic, Jim Endruweit, stares at his stopwatch as Sally looks aghast at the diminishing lead. Bob Dance, right, has seen it all before…

By switching off the engine through the quick corners, Jim nurses his car to the finish. It’s an historic victory

Now up on the float behind the tractor, Jim explains to Colin Chapman what transpired in the closing laps

Bell Magnum off, Jim fills in more details. Around the back of the car, Leo Wybrott has a laugh

Silverstone’s Jimmy Brown – a fellow Scot – looks a little worried about the crowds that are now streaming onto the pit straight. Dick Scammell (below right) chats to Jim and Colin

The trophy presentation takes place on the float. Dean Delamont of the RAC (left) and the Hon Gerald Lascelles assist with the honours

With Leo all smiles in the background, Clive, Sarah and Jane Chapman join their father in waving to the huge crowd

Appropriately, a lovely convertible Lotus Elan drives a path through the crowd

It’s a bit breezy out on the circuit but they’re both well-prepared!