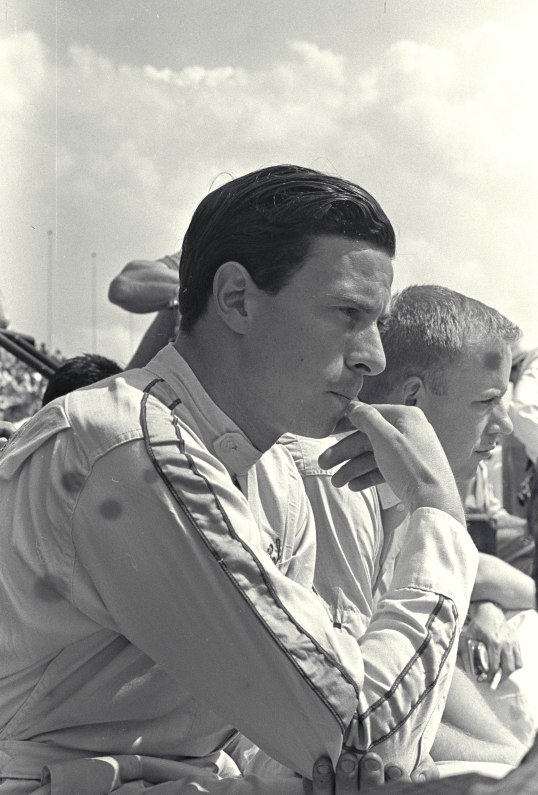 Silverstone and that dramatic escape behind him, Jim Clark returned to the cauldron they call Indianapolis, this time residing at the Speedway Motel.  He and Dan Gurney were ready to roll on Monday morning – and to apply, therefore, the finishing touches to their all-important qualifying attempts.  If they didn’t make it on this first weekend there would be no Monaco Grand Prix.  It was as simple as that.  And if there was no Monaco Grand Prix, Jim Clark’s 1963 F1 season was going to become unnecessarily tough.  After losing the title in 1962 by a single point, and now having won Pau, Imola and Silverstone in quick succession, he was keen to keep the momentum going.

Jim was delighted to find that Hinchman and Bell were true to their word.  His brand new overalls were, he thought, a little on the gaudy side – but this was Indy; and the race suit, critically, met all the USAC regulations for flame resistance.  Hinchman didn’t seem to be in the business of two-piece suits (of the Dunlop type to which Jim was now accustomed), so this one-piece overall featured a neat little belt with a silver clip-buckle.  Once he’d decided that regular shirts and pullovers were a little too casual, Jim had never worn anything but blue Dunlop overalls – first in one-piece form and, since 1962, with a separate topped tucked into the leggings.  Now, as he tried on the Hinchmans for the first time, he saw in the mirror a completely different person.  The shiny overalls were a base primrose-yellow with mid-blue stripes down the arms, pin-striped in red.  There seemed to be no logic to the colours but he liked them all the same.  His name was embroidered at an angle below the left chest zip pocked and on the right side was a Pure logo.  Jim shrugged and packed the suit into his Leston bag.  He’d wear it in the car but, between runs, he would change quickly back into his sea-island cotton polo and slacks or perhaps his shirt and tie.  He also found a new Pure jacket waiting for him in his hotel room.  He liked it.  It was dark blue – his colour – with blue and white cuffs and collar.   Very Border Reivers.  And the Pure badge was neat and tidy.  Without even thinking about the implications for Esso, he decided then that this jacket would not only be useful at Indy but also in Europe.

The new Bell Magnum felt only slightly heavier than his Everoak but was considerably thicker all over.  A neat white peak was clipped into place by four big studs – a significant improvement over the strap/stud arrangement that had caused so much trouble at Spa the year before, when the peak on his Everoak had been blown loose by the rush of air at high speed.  Problem was, the Bell was finished in plain silver.  Jim wanted to wear it right away, enabling him to get used to it in the build-up to qualifying.  In the meantime he would see if Bell could prepare another Magnum in dark blue.  It wouldn’t be ready for qualifying but he’d be able to take it back with him to Europe to use at Monaco.

Jim was amazed by the size of the crowd at the Speedway that Monday – and in the days that followed.  More and more, he seemed to be in demand.  Whenever he was in a public area they jumped on him for autographs and in Gasoline Alley the media were all over him.  For the perspective of a fan at the time (albeit 1966), read Don Fitzpatrick’s comment associated with our 1963 Silverstone International Trophy report.

There was a shortage of Halibrand wheels at Indy – itself a function of the trend-setting 15in Firestones being run on the Lotus 29s;  Dan, not completely comfortable with his set-up, spun his blue-and-white car into the wall; and the wind gusted up as Jim’s qualifying run approached:  it was tense and it was time to go to work.

“On the day of qualifying there was a fair-sized wind blowing at Indianapolis.  I knew I wouldn’t get another opportunity, and, though quite a number of cars had been out and had failed to qualify because of the conditions, I had to make a real effort.

“It was a tense time, with the wind blowing in 35mph gusts and the car was very twitchy indeed.  Three hours previously I had been going around pretty steadily at about 151.5 mph, and Colin timed one lap at 153 mph;  but these speeds were not possible when I went out for the official trials.

“Dan’s practice crash had caused some embarrassment, because he wrote-off two of the wide-rimmed wheels I was due to use on my car for qualifying.  So I did my qualifying with none of the rims matching – two wide ones on the outside wheels and narrow ones on the inside.

“Anyway, after a few minutes of gritting my teeth and fighting the wind gusts, I eventually managed to qualify at 149.750 mph, which put me in the middle of the second row. 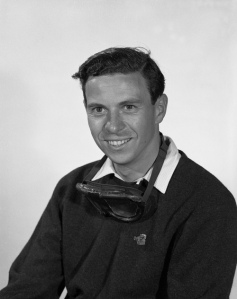 You know, it’s amazing what a difference the track temperature and air temperature make to lap speeds at Indianapolis.  I went out one day and couldn’t do anything better than 148 mph.  Colin was trying to sort out the reason, and though he did everything he knew, the car just couldn’t be got round any quicker.  We realized later that the speed was being cut by the heat, and we also realized that at that time all the other drivers had parked their cars away and weren’t troubling to go out.  Local knowledge does help!

“The technique for the lap was relatively straightforward:  I dabbed the brakes going into each turn and had to smack them pretty hard when I had a full load of fuel aboard.  The difficulties about Indianapolis are the lack of distinguishing features around the circuit and the fact that there is no apex on the four turns.”

Jim had made it – and so, in the spare Lotus 29, painted in Jim’s green and yellow colours, had Dan.  They could relax.  And they could begin the rushed trip, with Colin, back to Europe.  Practice for the Monaco Grand Prix would begin on Thursday, May 23.

Captions from top: Jim, wearing new Hinchmans, in nail-biting mood as he listens to the pre-qualifying drivers’ briefing and draw; Middle: Jim loved the blue-and-white Pure jackets that came with the American oil company’s Indy sponsorship (via its Ford connections).  He wears it here over his Esso-badged blue Dunlops!; Above right: the official Indianapolis portrait of Jim Clark; Above: Jim, in the new silver Bell Magnum, after qualifying the Lotus 29 on the second row.  Around him, from left to right, are Colin Chapman, Jim Endruweit, David Lazenby and Colin Riley