As we remember the passing of the gentleman and racing driver who was Piers Courage (June 21, 1970), I make no excuse for posting my favourite magazine front cover:  and, yes, that is Piers’ wife, Lady Sarah, on his right! 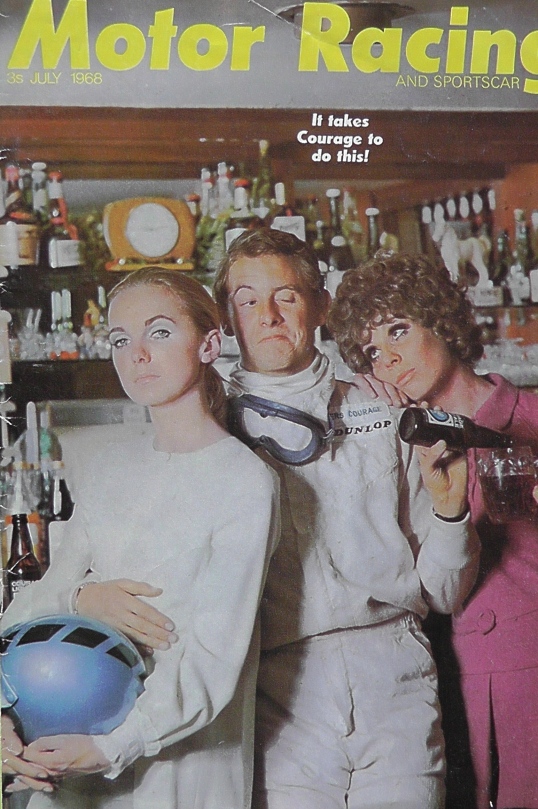 Below: I took this shot of Piers in February, 1968 at Warwick Farm (Sydney, Australia) prior to an unofficial practice session for the Tasman Race.  Note Ian Geoghegan’s magnificent Ford Mustang and assorted Formula Vees in the background. Piers would finish a brilliant third on Sunday in his F2 McLaren M4A-FVA, beaten only by the Gold Leaf Team Lotus 49-DFWs of Jim Clark and Graham Hill

Above: I later asked Piers to sign a Courage beer coaster I’d obtained in the UK.  As Courage beer was not sold in Australia, he was both delighted and bemused.  “My gosh!  Where did you get this?” he asked with a smile.  I’ve cherished it ever since

My colleague, Alan Gow, has pointed out that Courage actually set up a Melbourne brewery in 1968.  There is no evidence that Piers kick-started the new project whilst at Sandown Park for the Tasman race that year, but it’s a nice idea.  This contemporary Aussie ad perhaps lacked some of the subtlety of its British counterpoints but at least gave it an Antipodean stamp…