When Williams’ victory team talk was disfigured by a sudden explosion, the F1 world was united by action.  Many, indeed, were the acts of heroism 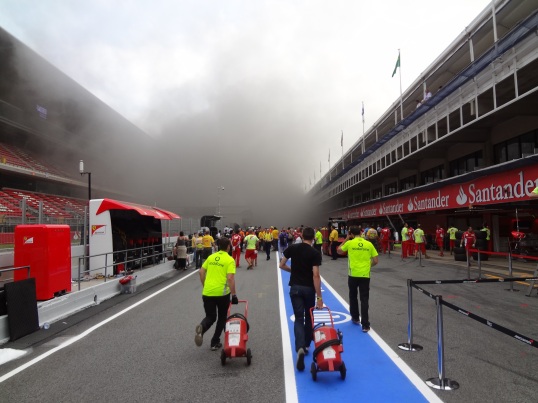 Sir Frank Williams had just begun his post-race pep talk.  Many of the WilliamsF1 team members were crouched around him, craning to hear his words.  He spoke of the effort they had been making over the past months, of the improvements brought by the technical team….

…and then violently, seemingly from nowhere, came a ball of flame…

We don’t yet know the detailed cause of the explosion.  It was fuel-related;  that seems to be clear.  Many suspect that there was also a KERS element.  Hopefully we will know soon.

What is clear is that F1 again showed its grit under pressure.  Dr Mark Gillan, Williams’ Chief Operations Engineer, grabbed Frank and moved him swiftly towards safety.  Mike Coughlin, Technical Director, was soon on his hands and knees, scouring the garage for anyone possibly in danger, seemingly oblivious to the toxic smoke and flames.  And F1’s mechanics – from all teams, including Williams – were exemplary.  Local fire-fighting crews had begun to pack up;  the race was over.  As Diego Merino’s picture shows, mechanics grabbed fire extinguishers and ran to the scene from all directions.  These two – James Prosser (tyre man) and Lee Hart (Lewis Hamilton’s car) are from McLaren.

Exposed personnel were cared-for in F1 motorhomes – at Red Bull and Force India; thankfully, as of this writing, there appear to be no critical injuries.

For WilliamsF1, though, the damage has been immense.  Bruno Senna’s car – in the garage following its shunt with Michael Schumacher’s Mercedes – has been severely damaged.  All of the major computer and garage equipment has been destroyed.   Many Williams team people are still in Barcelona, surveying the damage and drawing up contingency plans for Monaco.  There are even a few whispers that the team may not be able to race at the Principality.

I doubt that.  If necessary, I believe that the other F1 teams will come to Williams’ aid.  It is a part of what they do.