The Best in the West

WilliamsF1 celebrated their 600th Grand Prix start in 2013.  Here are a few thoughts – and memories – of times that will always make me smile

Before Silverstone, 1979, there were others. END_OF_DOCUMENT_TOKEN_TO_BE_REPLACED

I haven’t had much time for neg-scanning recently but managed to squeeze some in a few moments ago whilst watching a replay of Ashton Agar’s amazing innings at Trent Bridge in the first Ashes Test (cricket, for those of you unfamiliar with this sport of sports).  The idea was to scan a further ten pictures or so but I have to confess that I stopped after only two or three:  the sheer natural talent of this 19-year-old Australian spinner-batsman, combined with his humility, is just captivating.

Cricket?  Motor racing?  Jim Clark was an excellent cricketer;  let’s not forget that.

Anyway: back to motor racing.  Here’s some more from the glorious days of the Kyalami Ranch, South Africa:

That’s Alain Prost, now looking up from his copy of L’Equipe; 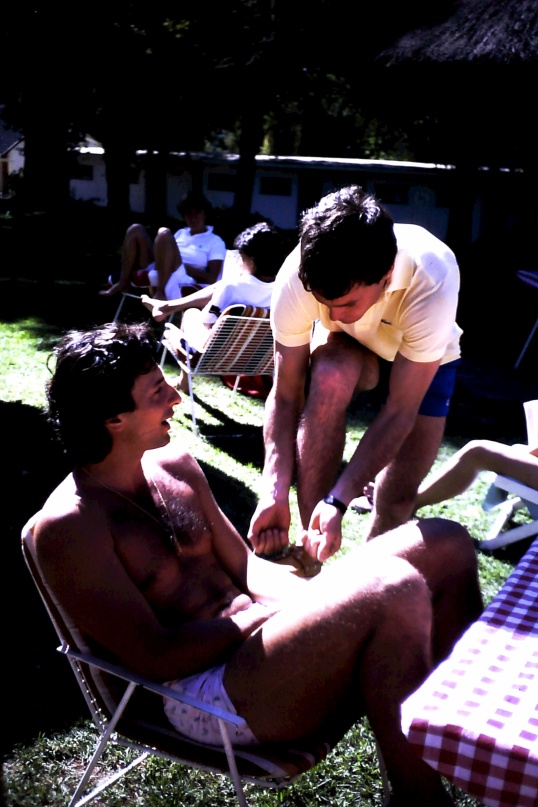 and this is something you wouldn’t see today – two Italian F1 drivers having a laugh (Riccardo Patrese and Andrea de Cesaris).  Back then, the concept of there being no Italians in F1 was about as laudable as an F1 season without the Kyalami Ranch.

Here are some de-briefs, too: 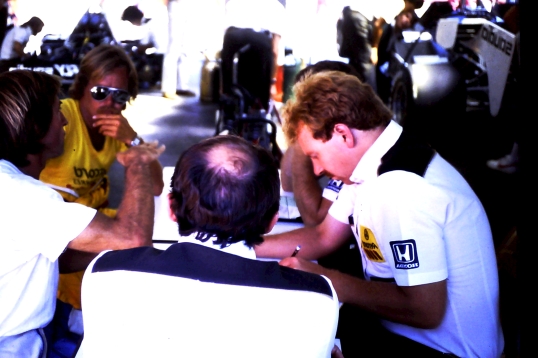 I recently put together the article below for the official journal of the (British) Motor Sports Association (MSA).  As the MSA magazine isn’t available on-line (it is sent to all British competition licence holders and industry figures) I thought you might like to see it here: 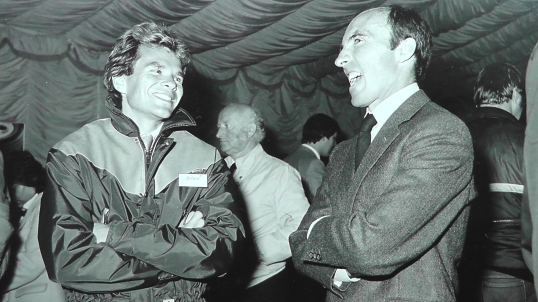 I had a lot of fun with Frank at the Goodyear track days that used to be staged before every British GP. Here, in 1981, we’re laughing about Nigel Mansell’s spin in the Lotus Esprit…when Frank was riding in the passenger seat….

IT WAS one of those regular Frank chats, born of a thinning pit lane and a dispersing Canadian crowd.  Frank, in wheelchair, wearing customary v-necked, dark blue pullover, grey trousers, black Rosettis.  Frank, a study in concentration, eyeing a Toro Rosso, a few yards from where he sat.

“All wonderful, thanks Pete.  Just looking at the TR there.  Wonder why they’re struggling…”

“Indeed.  No telling who’s going to be quick.  One race to the next.”

Silence.  A Frank silence.  Says a thousand words.  As in:  “You may be right.  You may be wrong.  No point in speculating.  Just get on with it. Things to do, job lists to tick.”

“Do you need anything,” I ask, noticing that Frank’s PA has for the moment disappeared to the back of the garage.

“No.  Fine thanks.  Just enjoying the sunshine.”

Ah. The sunshine.  A memory filters through.  Buenos Aires, 1979.  The same sun is glowing hot, dominating an azure sky.  And Frank is in the forecourt of the Sheraton, sweat pouring from his tender English skin.  Wearing a singlet, short shorts and Nikes, he is alternately jogging and then stretching, jogging then stretching.

It is Carlos Reutemann, king of Argentina, who speaks.

“Just a short one today.  Eight-miler.  Lovely there, down by the docks.  Saw Ken and Nora on the way…”

I look down at Frank, whose attention has now turned to the Lewis Hamilton McLaren being pushed down the pit lane towards Parc Ferme.  Again his is a face of contemplation.

It is Austria, 1985 – and we’re setting off for a run in the mountain foothills.  It is Saturday night.   A brief shower has passed.  The air is clear.

“Must sign Nelson this weekend,” he says, breathing easily.  “Talk to him tomorrow.  Ask him to come to the caravan when he gets a moment.”

“I spoke to him this morning,” I say, gasping a little.  “He’s fed up at Brabham.  He’s definitely ready to move.”

A spurt from a nearby wheelgun – the prelude to a Force India pit stop practice – jolts me back.  “How’s the sponsorship going, Frank?” I ask, intrigued as I am by the after-affects of Pastor’s recent win in Spain.

Frank again peers into the middle distance that, over the years, has become his friend and support.

“I think it’s looking pretty good,” he says, choosing each word with care.  “Spent a lot of time in the Middle East recently.  It’s not the old days.  You don’t wait for their response.  You provide a service.  That’s what it’s all about.  We’ve put a lot of effort into the base in Qatar.  We provide a service and from that things may grow.  That’s the way now.  Sponsorship is changing, Peter.  We have to maximize every part of the company – maximize what we can do.  I love this new aspect of the business.  Fascinating…”

I concede (to myself) that I am impressed.  McLaren appear to be the world leader in (another F1-word coined!) Applied Technology – in leveraging F1 expertise to generate income or product from other industries while simultaneously opening doors to new sponsors (Lucozade, via GlaxoSmithKline being a classic case in point)  – but WilliamsF1, to my eye, lies a strong second in this new race.

There’s the flywheel KERS technology Williams Hybrid supplied to the Le Mans-winning Audi team;  there’s the Williams-Jaguar C-X75 hybrid Supercar programme;  there’s the partnership with Kinetic Storage Systems for the development of low-carbon mass transit rail and grid networks;  there’s the Williams Technology Centre in Qatar, and its association with Silatech, the employment-generating company owned by the region’s royal family;  there’s the deal with the Canadian-based multi-national, Hatch, to supply F1 technology for mining, metal processing, energy and transportation; there’s the Qatar simulator deal with Mowasalat; there’s the partnership between Williams Hybrid and Go-Ahead to develop flywheel energy storing applications for buses; there’s the award-winning Williams Conference centre and Museum at Grove, Oxfordshire, and the afore-mentioned, similarly-impressive, facility in Qatar (venue of the global Tedx Summit in April);  and there are the nice little touches like the  “The Williams Story” topiary – the silhouette of car and pit personnel that won a Gold Medal at the Chelsea Flower Show eight days after Pastor’s win in Spain.

All busy, diverse stuff – most of which arose from 2010-11,  when Williams were in a racing slump.  It is a reminder that Frank always seems to be at his most creative, and at his most industrious, when things appear not to be moving along well.  We’d win the British GP but on Monday Frank would walk into the Race Shop with a face like thunder:

“What are those vans doing, parked in the truck bay?”

“Just the mini-vans, Frank, about to go back to the rental company.”

On a bad Monday, however – the day after the race you’d want to forget, Frank would be a different man:

“How’s the wife?  How’s the dog?  Anything you need?” END_OF_DOCUMENT_TOKEN_TO_BE_REPLACED