First things first: Andrew Ferguson, Team Manager, was corralled by Colin Chapman at the beginning of May to paint the number “82” on the nose of Lotus 38/1.  This was the result: 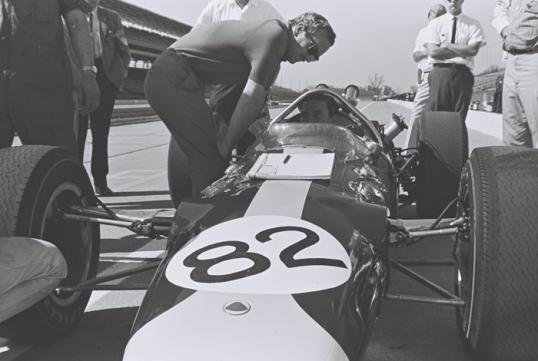 Very quickly, Colin employed the services of an Indy professional signwriter (George Gruber).  The result, complete with serifs, was artistic magic. Andrew (pictured below right in the background, in dark polo shirt) later recalled the incident in his excellent autobiography.

In terms of performance, the month of May began well…and grew better by the day.  First time out on the famous Speedway, Jim loved the feel of the Lotus 38.  Very quickly, the month became a systematic box-ticking exercise punctuated by frequent breaks: fuel consumption runs, tyre choice, transmission tests…engine change. Here, Jim’s climbing into the 38 at the still-empty Speedway.  At this stage of the month he was wearing his Bell Magnum minus peak (as he had done since Easter Monday Goodwood) but was already using a new design of Firestone/Hinchman overalls. Later in the month he would add a Team Lotus badge to the top-right chest space. As Jim wore seat belts (shoulder and waist) as per the Indy regulations, he required the assistance of Chief Mechanic Dave Lazenby, Jim Smith (left) and Mike Underwood to climb into the cockpit. This was a far cry from F1, where, on the same weekend as Indy, Graham Hill would win a classic victory at Monaco after spinning his BRM in avoidance of a slower car, climbing out, pushing it back into position with the assistance of the marshals and then rejoining the race 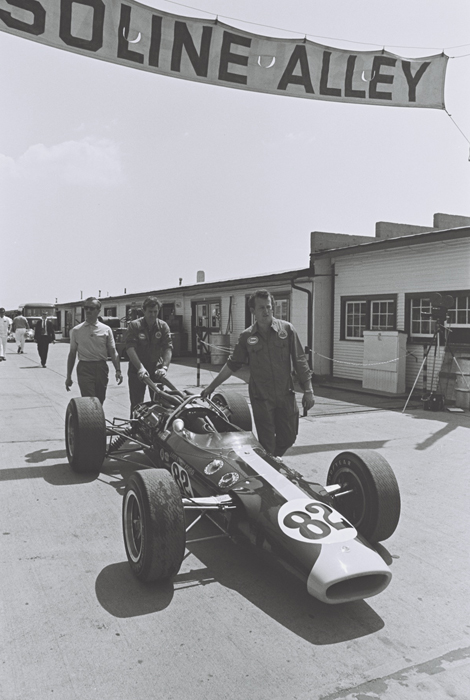 Jim Smith, Mike Underwood and Colin Chapman wheel Jim’s Lotus 38-Ford out of Gasoline Alley on or about May 3:  the car has yet to be fitted with its cooling duct over the pedal area 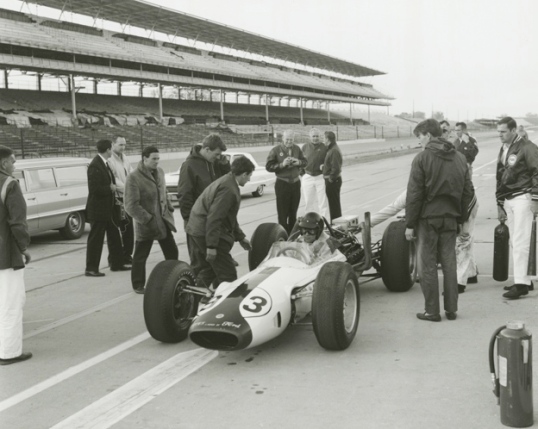 It was the 1960s…but the schedules – and the demands – were no less than today’s.

Immediately after winning the Mexican Grand Prix, Jim Clark, Dan Gurney and Colin Chapman flew to Indianapolis via Chicago. From the warmth of the Gulf to the chill of the mid-west. From a 1.5 litre Coventry Climax-engined Lotus 25 (or, in Dan’s case, Brabham BT7) to the new four-cam Indy Lotus 29-Ford.  To an empty, echo-ey Indianapolis Motor Speedway, where the bitter winter winds were already whistling around corners in Gasoline Alley.  To a full-on engine and tyre test in company with the Ford top brass and engineers from Goodyear, Firestone and Dunlop. END_OF_DOCUMENT_TOKEN_TO_BE_REPLACED