The Aintree 200 meeting 50 years ago was significant not only because it was the last major motor racing international staged at the racecourse owned by Mrs Mirabel Topham; it was also the scene of one of Jim Clark’s rare F1 accidents. Racing Jack Brabham hard for the lead, Jim was forced off-line by a back marker and spun heavily into the straw bails at Melling Crossing. His new Lotus 33 was destroyed, obliging Team Lotus to revert to the 25B for the opening rounds of the 1964 Championship. Earlier in the day, as we recount below, Jim finished second in the new Ian Walker-run Lotus 30 and won his class with the Ford Lotus Cortina.

“I was lucky to walk away from the wreck,” said Jim later. “The accident highlighted the dangers when lapping slower cars.”

Jim debuted the new Lotus 30 at Aintree and finished second after starting from the back of the grid, setting fastest lap on the way. In terms of handling, though, the 30 was a long way from Bruce McLaren’s winning Zerex (now re-named “Cooper-Climax”) 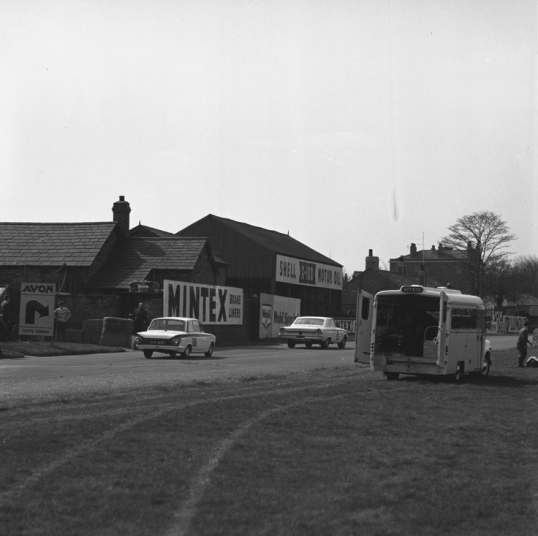 Jim won his class in the Aintree round of the British Touring Car Championship with the Ford Lotus Cortina. He pushed Sir Gawaine Baillie’s Galaxy hard but the big car always had the legs. Jim headed the other Cortinas driven by Peter Arundell, Frank Gardner and Jackie Stewart

7 thoughts on “Jim walks away…”