The Battle of Reims

The drive down to Reims was the usual cavalcade.  They left Zandvoort, after a celebratory dinner/cabaret at the Bouwes Hotel, early on Monday morning.  First practice for the French GP would commence on Wednesday afternoon (or just one clear working day from the Dutch GP.  As with Monaco now, there was a “free” day within the French GP schedule back then.  At Reims, this was on the Saturday, following three successive afternoons of official practice.  No thought, apparently, was given to the ‘double-header’ pressures facing the mechanics.)  At some point in the road trip Ian Scott-Watson joined Jim and Colin in their rental car and allowed Trevor Taylor behind the wheel of his yellow Elan.   Ian would thereafter spend much time telling the French police that, no, it wasn’t he who had been driving the English sports car at the time in question and that his friend, the culprit, had since flown to Canada…or anywhere…

This wasn’t the usual sun-baked French Grand Prix.  Showers muddied the paddock on Thursday, leaving the Wednesday and Friday sessions for grid-shaping;  Taylor, indeed, set his fastest lap on that Wednesday – and on Thursday, in the rain, neither Lotus driver completed a lap.  (One significant casualty that day was Ludovico Scarfiotti, who crashed heavily in the works Ferrari.  He was for the most part uninjured but shortly afterwards would announce his retirement from racing.  Rescinding this a few months later, he went on to win the 1966 Italian GP for Ferrari at Monza.  He would sadly lose his life in 1968, in a hill-climbing accident.  He was a good friend of Jim’s.)

Wet or dry, flying stones were always an issue at Reims, inducing Lotus to revert to standard windscreens for this race.  With the aeroscreen, it was thought, there was always a risk of debris finding its way into the “jet”.  Slipstreaming on the long, ultra-fast (160mph) French public roads could gain you seconds per lap;  the trick in practice, if you were searching for the pole, was to keep your mirrors free.  Despite a considerable straight-line speed deficiency to the BRMs (including Innes Ireland’s BRP-BRM) and also to the Ferraris, Jim took the pole – and the local champagne that came with it.   In the 25, running the same set of Dunlop R6s he had raced at Monaco, Spa and Zandvoort, Jim found a sweetness in the balance on high-speed corners that he had not felt before – or would feel again in 1963.  “I could set the car up in a whacking great drift around the back, keep my foot it it and achieve cornering speeds that I wouldn’t have thought possible,” he would say later.  Very few photographers – if any – seemed to venture out to these corners in those days (they focussed on the “long” shots on the pit straight and the 90 deg right hander leading on to it) so we are left only to imagine what Jim describes as that “whacking great drift”.  To my mind, given the understeer with which he lived at the International Trophy race at May, the 25 at Reims was now far more neutral – neutral leading to oversteer.  I think it’s also probably significant that by this race Team Lotus seemed to have found some sort of fix for their gearbox drams.  Jim, at last, was able to drive the 25 with both hands on his red leather-rimmed wheel.

Saturday was support-race day, which meant big sports cars and Formula Junior.  Jim was at the track, of course, primarily supporting the Normand Lotus 23Bs (Mike Beckwith and Tony Hegbourne) and Peter Arundell in the FJ race.  There had even been talk of Peter racing the third (spare) 25 in the Grand Prix but ultimately it was felt (when balancing prize money against running expenses!) that Peter should race the works (“mini-25”) 27 FJ.  Denny Hulme again won the FJ battle in the works Brabham, pulling away definitively from the second-place slipstreaming group and finally finishing ahead of Peter, Richard Attwood (MRP Lola), fellow Lotus drivers, Mike Spence and John Fenning, and David Hobbs (MRP Lola).  (As the 50th anniversary of the formation of Bruce McLaren Motor Racing Ltd approaches, it’s also worth noting that the talented American, Tim Mayer, finished eighth in this Reims FJ race in one of Ken Tyrrell’s Cooper-BMWs.  Tim and his brother, Teddy, would in the months that follow become an integral part of the new McLaren team.)

Tall and talented Mike Parkes should have won the sports car event with his formidable 4-litre Ferrari but a clutch problem early in the one-hour event effectively handed victory to Carlo Abate (also of powerboat fame) and his 3-litre Ferrari.  Lucien Bianchi (great uncle of Jules) placed third behind Dick Protheroe – and the tough Australian, Paul Hawkins, finished fifth overall with his Ian Walker Lotus 23.  Mike Beckwith had been right up there in third place in the early phase, when Jo Schlesser was leading with his 4-litre Aston, but he fell back a little after a slight “off”.  The small-car class was won by Jose Rosinski, who would go on to become one of the greatest of all French motor racing journalists.

On Sunday – another overcast day – Jim prepared for a torrid French GP as a fighter prepares for a bout, applying white masking tape across his face for extra protection.  Even in the dry, this race would run for well over two hours.

The start, as they say, was the usual shambles.  A fuel vapour lock killed the engine in Graham Hill’s BRM.  Push-starts were forbidden by the regulations…but “Toto Roche”, the autocratic leader of French motor sport and official starter, instructed the BRM mechanics to push Hill’s car nonetheless.  The V8 now revving purely, Roche then quickly stepped away and dropped the flag – except that he dropped a red flag rather than the French national tricolor.   No-one was exactly sure what to do – but they went for it nonetheless.

Jim Clark accelerated hard through the gears to 9,600 (with a max set at 9,800) and then focused on driving the perfect lap:  “Before the race,” he would say later, “I had said to Colin that if I could make the fast corners in front I felt I could open a gap and break the tow.  If I wasn’t in front we agreed that it would be better if I just sat back for a while and let them get on with it…”

Jim’s standing lap was completed in 2min 31.0sec;  his Indy team-mate and friend, Dan Gurney, lay second a full 2.7sec behind.  Richie Ginther, powered by probably the best engine on the circuit that day, catapulted his BRM up to second place on lap two.  Even so, Jim was leading by nearly four seconds as he passed the Team Lotus signalling board, the 25 sitting on 9,600rpm.

And so it went on.  John Surtees (Ferrari), Dan and Jack (working together in the Brabhams), Bruce McLaren (Cooper), Trevor and Graham Hill scrapped over second place, swapping track space either in top gear, in the tow – or under braking.  At the front, Jim continued to pull away.   By lap 12 of the 53-lap race, he was 19 seconds ahead of Brabham.

Then, for Jim, it all seemed to go wrong.  His Climax engine began to mis-fire at 9,600rpm.  Jim immediately throttled back to 8,000 rpm, where he found a “sweet spot” around which the engine seemed to be half-ok.   He then concentrated even harder on those fast corners but was forced to sit back helplessly on the straights, waiting for the engine to blow – and/or for the next round of bad news on the pit board, for  Brabham was now catching him.  All around the circuit, what’s more, Jim could see parked cars.  Reims was forever tough on all mechanical components – so why was this circuit, on this day, going to be any different for him?

Because on this day – as it had been all week – it would rain.  Jim felt the grease on the track even before his goggles went smeary, for the grooves of the R6s were now worn virtually to slicks.  He was dancing on ice – focussing once again on those fast, very drifty corners where still the 25 felt perfect.  His lap times climbed by ten, 15 seconds;  Graham Hill’s ballooned by 20 seconds.  Maximum revs became irrelevant;  it was all about delicacy.

And so, maintaining that lead, Jim Clark crossed the line, acknowledging Toto Roche’s chequered flag with a raised left arm.  In the grandstands, umbrellas dominated the visage.  On the rev-counter of Jim’s 25, the tell-tale needle sat resolutely at 9,600rpm.  On the work bench later, back in Coventry, Jim’s engine was found to have two broken valve springs.  Trevor (who for this high-speed race, like Jim, raced without a peak on his helmet) might well have finished second had the crown-wheel-and-pinion not failed.  As it was, Graham Hill’s second place was subsequently disallowed due to that push start (subsequently, as in “by the time they got to Monza”.)  Tony Maggs therefore finished an excellent second for Cooper, catching and passing Hill in the closing stages when the monocoque BRM ran into both clutch and brake issues.  Jack took Graham’s third place, with Dan finishing fourth.

Post-race, there was more pandemonium:  a policeman suffered an epileptic fit as he was attempted to clear the crowds from the pit area.  Through the melee, though, Jim and Colin found their way opposite to “the press box”, where they chatted to journalists like Gregor Grant (Autosport), Philip Turner (Motor), Peter Garnier (Autocar) and several of the Fleet Street types.

Thus it was done.  A new era had begun.  Jim Clark and Team Lotus had won three in a row – Spa, Zandvoort and Reims – and had changed the face of Formula One.  The driver lay low in his monocoque car.  The speed, and the suppleness of that speed, was extraordinary.

Next:  the British Grand Prix at Silverstone. 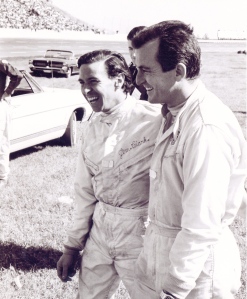 Captions from top: face taped to provide at least some protection from flying stones, Jim Clark readies for battle at Reims;  Reims practice shot of Jim in the aeroscreened 25; for the race, the conventional screen was used.  This was also the last race for a 25 sans yellow stripe; Jim and his friend, Ludovico Scarfiotti, photographed at the Rockingham NASCAR race in 1967  Images: LAT Photographic; Peter Nygaard Collection; Peter Windsor Collection

5 thoughts on “The Battle of Reims”