When F1 first came to Texas… 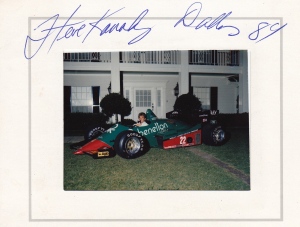 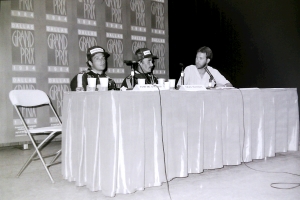 …it took over the entire city of Dallas.  It was a street race.  It was hot – very hot.  And the city said “F1” wherever you went.

It was different this year in Austin.  The circuit is out of town.  You sat in a coffee shop near the University of Texas and the world of F1 was about as far away as rainy day in Woking.

That’s not how it was in Dallas ’84.  Maybe it was because Lorimar’s Dallas had never been more omnipresent.  The whole world talked about it – not as a “soap”, as it is glibly described today, but as a skillfully-enacted drama that was about as close to reality as anyone had ever dared to step.  That’s how F1 people felt about it, anyway.  And the people of Dallas embraced their amazing new F1 race, for it was everything that their show was too:  it was about money, power, ego, politics, sex… and it was played out in a world within a world.   The poignancy of Larry Hagman’s recent passing should not have been lost on anyone who was at Texas F1 (Season Two) a few weeks ago. Austin didn’t feature much in the Dallas storylines, but the spirit of ’84 was there if you looked for it at the Circuit of the Americas.

Here are a few snapshots, then, of the days when Dallas met Formula One. Fun days. Amazing days.

Captions, from top left: Larry Hagman – he’ll be sadly missed.  His autobiography, published recently, is a must-read; I don’t know what I enjoyed most – the Benetton party at Southfork Ranch or posing in the factory Alfa with a sweet, Texan pussycat; F1 people headed quickly for Southfork Ranch – and found that it was just as it seemed to be in the show!; the delightful Linda “Sue-Ellen Ewing” Gray was golf-buggied to the starting grid;  Tyrrell’s Martin Brundle and Steve “Ray Krebbs” Kanaly shared some laughs; Ayrton stayed characteristically cool; Niki Lauda, who would win the Championship that year (by half a point:  you think 2012 was close!), with trademark fruit (who needs a drink bottle?!); this we’d never seen before: marching girls! On an F1 grid!; Keijo Rosberg won the race for Williams-Honda, helped in large measure by the cool suit created for him by Williams Team Manager, Peter Collins. We all approved of the headgear worn by the Willy boys, as modelled in the background by Chief Mechanic, Alan Challis; Brabham’s Corrado Fabi prepares for work.  Mickey Mouse t-shirts (won under the race suit, Rene Arnoux-style) were all the rage back then; Nigel Mansell catches up with the sports news on the bus into the paddock on Saturday morning: “Lotus’ Mansell sizzles on hot track…!“; Elio De Angelis and Nigel tell the US media all about it.  Honed by the Glen, Long Beach and Detroit and to some extent Vegas, the American press fully-embraced F1 in Dallas; Below: Nigel and his JPTL  race engineer, Steve Hallam, pause for a breather by a (rare) Colin Chapman-inspired DeLorean during their pre-practice track walk; Bottom: Patrick Duffy, and (in white polo, staring at the lens) the brilliant singer/songwriter Christopher Cross  feign interest during a briefing for the celebrity race.  “If you get caught between the moon and New York City….” just about summed it all up 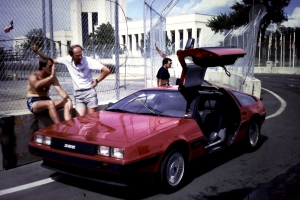 Posted in Circuits, Days Past, F1 and tagged Austin, Dallas, US GP

2 thoughts on “When F1 first came to Texas…”