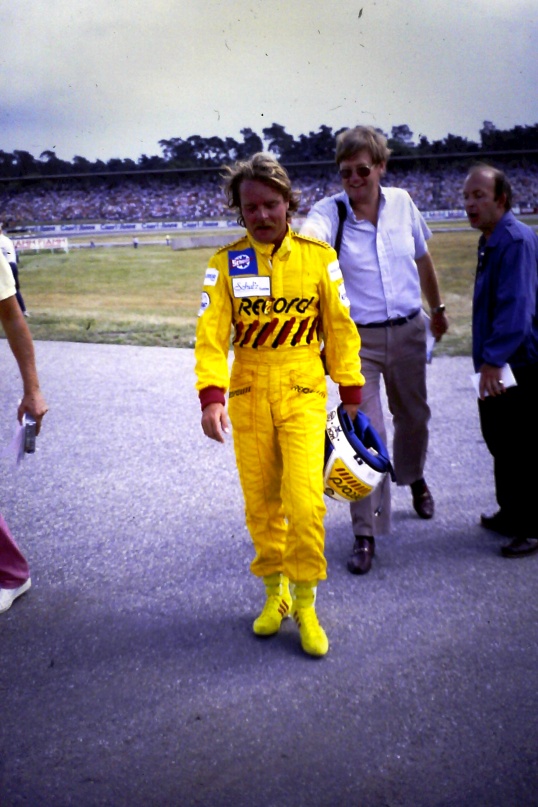 This being the week of Rosbergmania, especially in Germany, let’s have a look at Nico’s Dad, Keijo “Keke” Rosberg, in full yellow (ICI Fibres) regalia at Hockenheim, 1984. That’s Alan Henry and Nigel Roebuck in the background; both of them, to this day, remain close friends with Keke. Note Keke’s attention to detail: he was always immaculate.  When he wasn’t in race kit he was usually seen either in a Hard Rock “Save the Planet” leather bomber jacket (long before the rest of the world discovered them) or with something from Etienne Aigner or MCM. Nor is it  difficult to see from where Nico’s yellow colour-coding (helmet, gloves, etc) originates. Continuing the Rosberg theme, how about the shot below for good measure?  I took this at the Kyalami Ranch, South Africa, also in 1984. Alain Prost’s reading L’Equipe; Nelson Piquet Jnr’s Mum, Sylvia, is walking out of picture in the red bikini;  ace photojournalist, Jeff Hutchinson, is thinking about his next story for Autosport; and  Nico’s Mum (also walking) and Dad can be seen to Jeff’s left. 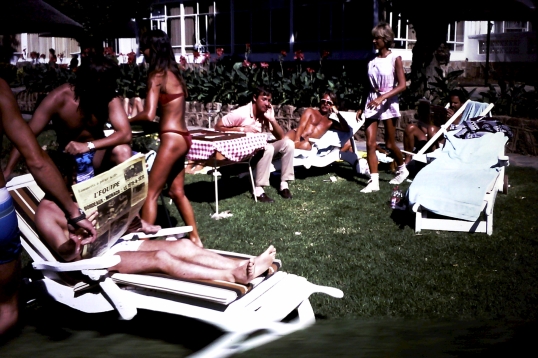 For those of you who haven’t yet watched our free, weekly, in-depth, on-line F1 chat show, remember that you can enjoy The Racer’s Edge every week on YouTube (Thursday, 7:00pm and thereafter on-demand) or you can download it from iTunes, where we have a high-speed facility for both the audio and video files.  Just enter “The Racer’s Edge” in the iTunes search engine and you’ll see a list of all the episodes.  (Although we also process the show for iTunes on the Thursday of each week we have no precise control of the actual release date. Usually it is within 24 hours of posting.)  Please “subscribe” to our YouTube Channel (as per the widget on the right).  This costs nothing but it allows you to receive regular email updates of all the new content we’re producing – and there will be more and more as the year develops.  Remember, too, that we often produce video not featured on The Racer’s Edge, ranging from interviews with wonderful racing people from the past (for example Mike Beckwith) to young up-and-comers on the way to Formula One (like Stoffel Vandoorne).  I also invite you to leave comments on our YouTube page.  We will read them, reply to them where appropriate – and your thoughts will also help to guide the way we move forwards.

If you are a regular viewer – thanks for watching.  We had just over 121,000 hits in the month of June – and over 80 per cent of you were watching the 60/65min show for 80 per cent of its length or longer.  We were also consistently in the top ten urls on iTunes in all aspects – hits, visits and downloads.  Interestingly, I think, about 50 per cent of you were watching from the USA, which just goes to show what I’ve always suspected:  the American F1 fan is amongst the best-informed in the business!

This week’s show is bursting with interesting people and comment:  as well as chatting away with Rob Wilson in the studio, we talk to Daniel Ricciardo, Sam Bird, Derek Daly and Craig Scarborough.  A lot of fun, a lot of laughs – and lots of detail about the sport we love.

In the meantime – again, in case you haven’t seen it – have a look at the episode below.  We filmed it on the Wednesday before Silverstone at LotusF1’s headquarters in Oxfordshire with the support of Avanade, the IT systems company.   This is a good example, I think, of an F1 partner company using digital media to tell a story that you wouldn’t necessarily see or hear on the conventional platforms.  I enjoyed, too, the chat with Alan Permayne.  Which reminds me:  if you haven’t yet joined the F1 Racing magazine Global Fan Community, then you should do so now.   GFC members will be given exclusive opportunities to ask questions of our featured guests – and to be in the running for some great prizes.  The winner from this interview was Mr Colin Bowett, from the UK.  His question to Alan:  “Do you think it’s odd that Kimi doesn’t do a track walk on Thursdays?”   Some excellent LotusF1 merchandise will now be coming Colin’s way.  You can join the GFC by going to the appropriate link published in the latest edition of F1 Racing.

I like Pirelli’s response not only to the FIA statement of yesterday but also to the specific tyre problems we saw at Silverstone.

Low pressures and high camber angles have been standard practice up and down the pit lane – and it’s interesting that Pirelli condoned the swapping of tyres, left to right. The kerbs are the kerbs, though, as the BRDC’s Derek Warwick said recently. The  early-race on-boards of Lewis Hamilton, which I have seen, show that he uses only a tiny amount of apex kerb at T4. Fernando Alonso uses more – maybe a foot more – but conversely had no problems. It could be, of course, that the “safe” line at T4 was Fernando’s but it’s also interesting to note that Daniel Ricciardo, for instance, never touched the T4 apex on any of the on-boards I viewed.

On Pirelli and glass houses…

The FIA today announced that the  Young Drivers’ Test at Silverstone on July 17-19 would be opened up to regular F1 drivers “to allow teams to use drivers they deem fit to carry out tyre development work in a bid to solve the problems we saw at the British GP”.  Even more significantly, the FIA says it will seek approval to “change the Technical Regulations to allow modifications to the specification of the tyres during the season without the unanimous agreement of all competing teams”.  This, I think, is to be applauded, bearing in mind that Pirelli wanted to revert to Kevlar constructions after the first Bahrain incident and were forbidden for doing so by the teams, who could not come to a unanimous agreement.  (Lotus and Ferrari were going well at the time and understandably did not want to see any major construction changes at that point.)  It also seems likely that the ridiculous (current) requirement for Pirelli to define its 2014 tyre specification by September 1, 2013, will be re-written.  Less comforting is the closing threat in the FIA statement today: “the FIA has asked Pirelli for an assurance that there will be no repetition of the tyre problems at this weekend’s German GP or at subsequent grand prix (sic).”  I may be reading too much into it, but that to me sounds like a governing body potentially wanting to discipline a tyre supplier – the only tyre supplier that would step into the void left by Bridgestone – for making future mistakes.  What would happen, for example, if Sebastian Vettel in Germany this weekend suffered exactly the same sort of tyre failure that took him out at the first corner at Abu Dhabi in 2011? Does anyone outside Red Bull Racing and Pirelli know exactly what happened on that occasion?  Judging by the number of different opinions in the pit lane to this day, I think not.  Surely the role of the FIA at this time – when Pirelli have been subjected to massive criticism from all quarters – is to re-assure the F1 tyre supplier that it has the support of the people who matter.  Pirelli have made mistakes – and will continue to make mistakes – because that is the nature of the F1 business.  Indeed, it is the nature of life.  I make mistakes – plenty of them.  The F1 teams make mistakes. The drivers make mistakes. And so, come to think of it, does the FIA.  I seem to recall some FIA fuel rigs under-performing a few seasons back – and who ratified the regulations that are now being changed mid-season?  Of course Pirelli have had a bunch of problems – but then so did Michelin back in 2005, at Indianapolis.  I think it’s interesting that a number of F1 people who now dream of a Michelin return were the same people who refused to race at Indianapolis that year (when some sort of race could have been put together to save Michelin’s face in its biggest market) and who in 2006, at Monza, openly accused Michelin of cheating.  Pirelli spend several hundred millions of Euros per year supplying tyres for F1;  they don’t have to do it – and I’m sure that at present they wish they weren’t doing it.  In the absence of Goodyear, Bridgestone and Michelin, though, the alternative three years ago was for the F1 industry to produce its own tyres, with the vague hope of a sponsor branding the sidewalls.  Instead, Pirelli stepped up to the plate and everyone breathed a huge sigh of relief. In my view, it now behoves the F1 industry to stand squarely behind Pirelli, to give them the scope they need to do the job and not to threaten them with some sort of discipline if/when something again goes wrong.