The 1979 French Grand Prix is remembered as one of Gilles Villeneuve’s greatest races.  Wheel-to-clashing-wheel with Rene Arnoux in the closing laps, Gilles defied a lack of grip to seize second place on the final lap.  Afterwards, though, Gilles could think only of the race he should have won – would have won but for a chronic lack of grip.  And what of Rene Arnoux, who from this day onwards became a close friend of Gilles?  Let’s join the Renault team in their post-race celebration – in the days before mega-TV coverage, instant replays and YouTube…. 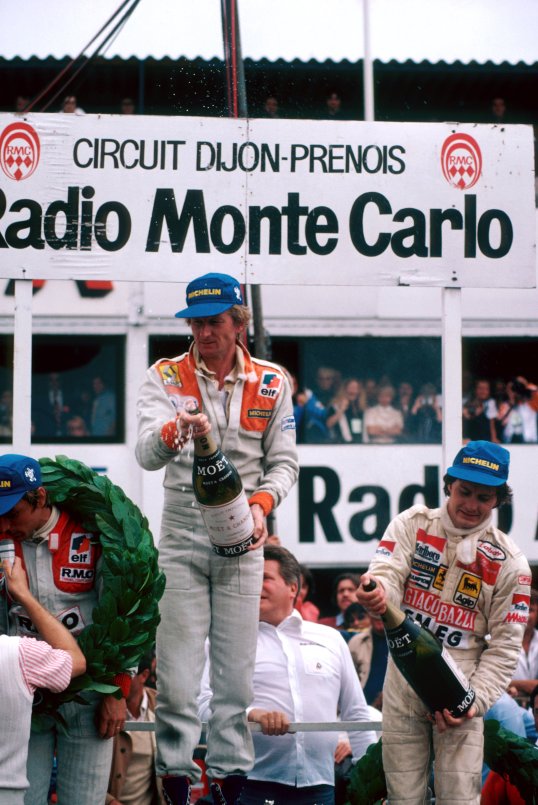 Emotional moment for all of France as Jean-Pierre Jabouille prepares to spray the Moet.  Gilles, subdued, is thinking only of how he could have won but for his Ferrari’s excessive Michelin tyre wear

It was six o’clock and Renault had won.  Won the French Grand Prix form the front row of the grid and set fastest lap.  An all-French victory of a kind far purer than the traditional all-English one, for the tyres had actually been paid for, designed and built in France and the engine had been financed by an all-French firm.  No Cosworths or Goodyears.  If you looked for foreign parts on the winning Renault you looked at the British Hewland gearbox casing or the Italian Magneti Marelli ignition or the German KKK turbochargers.  Otherwise, the Jean-Pierre Jabouille Reanult Turbo was all-French.  And it had won the French Grand Prix.

Renault Sport Director, Gerard Larrousse, excused himself because he said he wanted to watch the film.  The film?

He slipped past the phalanx of media crowding the motorhome and grabbed the arm of Rene Arnoux.  “Rene.  Come with me.  I have a surprise.”

The two of them went to the Marlboro Hospitality unit and took a front seat by a huge TV screen.  Arnoux, still in Stand 21 race suit, sat on the edge of his chair.  Larrousse, in black and yellow Renault jacket, winked at the crowd gathering around.

And so they ran the film – of Gilles Villeneuve, the Michelins on his Ferrari virtually gone – diving inside the Renault with two laps to go.  Smoke shrouds the Ferrari as it peels into the apex, but Gilles is there and Rene dropes back to third place.  “Encroyable!” says the commentator in French.  “Encroyable.  Villeneuve encore deuxieme!”

Rene opens his eyes wide, a young kid awaiting the next bit of action.  Larrousse sits impassively, the master in charge.  Next lap – and this is the last lap – it is Arnoux inside Villeneuve.  He has the line at the end of the stragith but the Ferrari follows him right round the outside, and the two clash wheels as they vie to become the first to apply the power.

Then comes the real action.  Arnoux has the line for an instant.  Then it is Villeneuve, sweeping to the other side fo the downhill plunge and looking perfectly set-up for the apex.  He is so – and Arnoux runs wide – in fourth gear – over the kerb, into the dirt and off the throttle.  Villeneuve is in front as the Renault rejoins – but only just.  Again, the two cars touch wheels, and the Ferrari slides sideways into what seems like the beginning of a very big spin.

It doesn’t spin, however.  Gilles, with astonishing car control, catches the moment and now the two are side-by-side, going into the slow, downhill left.  They touch wheels a third time, they both give a squiggle as they run off-line, and it is Arnoux who gets it together first, booting it towards the hairpin with second place seemingly in the bag.

Then he makes a mistake.  Arnoux chooses a wide, conventional entry for the right-hand hairpin and, in a flash, Villeneuve is inside him and on the power, smiling at the ease of the manoeuvre.  Then the Renault has no chance and it is Gilles Villeneuve who crosses the line in second place.

Arnoux slaps his palm against his forehead and asks everyone and no-one how he could have been so stupid.   After all that.  After all the wheel-banging, how could he have left the door wide open?  He turns to Larrousse in horror, ashen-faced at the sudden memory of his mistake.

There are no reprimands, no words.  Instead, Larrousse rises to his feet and begins the applause.  Rene, red-eyed, is clapped all the way to the door.

Joy on the pit wall in the closing laps as Rene Arnoux heads Gilles…..

…turns to dismay as Gilles leads Arnoux across the line….

Posted in Days Past, F1 and tagged RenaultF1, Villeneuve