Archive for the tag “Cheshire”

Jim’s hectic schedule was a blessing:  he had little time to dwell upon the post-Monza traumas.  After the Chapman party, Jim returned to Edington Mains for a couple of days, there at last to savour the feeling of securing the World Championship. There were interviews to handle; and the concept of an autobiography was quickly gathering strength. Too quickly, though, it was time to drive down to Tarporley in his new, prototype Lotus Elan for the Daily Express-sponsored Gold Cup meeting at Oulton Park. Although this was a two-day meeting, with practice on Friday and racing on Saturday, Jim was additionally required to drive the 25 in a filming session for Esso. Unusually, movie cameras were mounted on a specially-made, triangulated section behind the driver and in the footwell area.  Everyone remembered Graham Hill’s scare at the Nurburgring the year before, when he had clouted a camera that had fallen off another car, but this session, at least, would take place with no other cars on the circuit.

Cedric Selzer recalls Colin Chapman’s reaction to the filming in his superb new autobiography, “Jim Clark”:  “The camera on top was operated by a battery pack – basically a wooden box containing a number of batteries.  No-one had thought of how this box was going to be mounted.  It was too big to go on the driver’s lap.  While we were dithering over what to do, Colin Chapman came over, slightly irate, as he wanted to get away as soon as filming was over.

“He put the box on top of the two rear tailpipes and bound it on with tank tape.  We all looked at each other, knowing what the outcome would be.  Jim went out in the car and on the second lap he came in with the battery box missing. We were not surprised. The camera crew went around the circuit to collect it. They came back with the battery pack completely wrecked. Fortunately for them, they had a spare. Chapman played no further part in remounting the battery box.   The mechanics took over, did it their way, and there was no further trouble! Jim never went over 7,000rpm as he was worried about the battery box going missing again but he drove as if he was driving at full speed.”

Jim was scheduled to drive three different cars at Oulton – the 25 in the F1 Gold Cup; the Normand Lotus 23B; and, finally, now that it had been homologated, the brand new Lotus-Cortina.  He indeed raced the 25, and won with ease from the pole.  His new lap record established him as the first driver officially to lap Oulton at over 100mph; and top speeds in the F1 race, recorded for the first time over one-tenth of a mile on the back straight, underlined Jim’s feelings about the superior power of the BRMs.  Richie Ginther broke the trap at 139mph, Innes Ireland at 138.4 mph and Graham Hill 137.8 mph. Jim was the quickest Climax runner at 136 mph.  After this race, Selzer also wrote: “There have been many stories about the tyres on Jim Clark’s car lasting four races.  This is true, but also the brake pads lasted three times longer than those any other driver.  Derek Wild used to say that you could put all the gearboxes on the bench in front of him in random order and he could tell which gearbox came out of Jim’s car as it showed less signs of wear.   The point is that the standard of preparation was no different between Jim’s car and the number two car.  It was just that the man was very ‘soft’ on his car and so he tended to last the race distance as a result.” 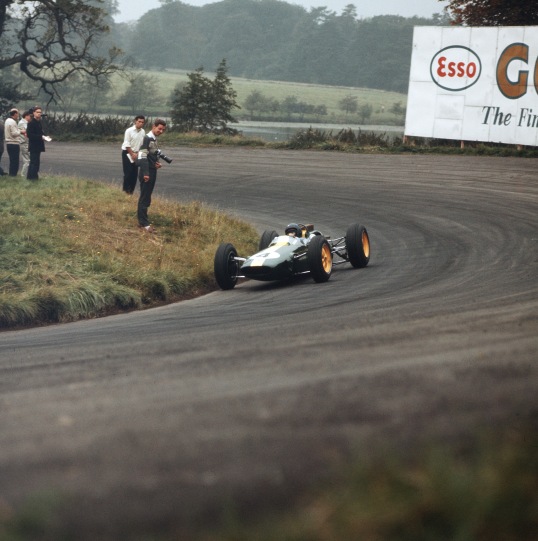 The remainder of Jim’s Oulton racecard was more complicated.  Having taken the lead from the front row of the sports car race – the first event of the day – Jim amazingly spun on the opening lap and dropped to eighth.  Frank Gardner, who had driven beautifully in practice to take the pole with the little works Brabham, crashed heavily in avoidance and was very lucky to escape serious injury. Despite all this, Jim sliced his way back through the field to win his class and to finish second overall behind Roy Salvadori’s venerable Tommy Atkins Cooper Monaco. 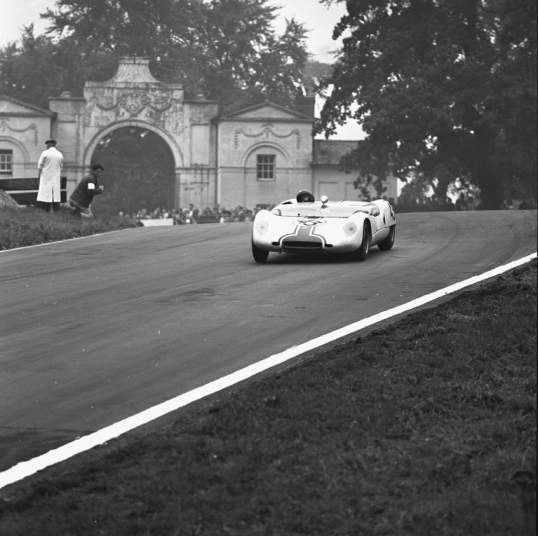 Jim practised the Lotus Cortina but stood aside to let Jack Sears race it: Ford of America enjoyed a relationship with Willment that extended far beyond motor racing and specially requested that Jack be allowed to debut the car officially. (Without in any way detracting either from Jack or Willment, it seems odd that Ford considered this to be more significant than having Jim Clark, Indy-Ford driver and new World Champion, in the car.  Such, though, were the times.) Jim watched happily with Colin as Trevor Taylor, now recovered from his Enna shunt, jumped straight into the other Cortina to qualify only a shade slower than Jack.

Trevor sat on Jack’s bumper for the duration of the race – and in addition qualified fourth for the Gold Cup, in the 25, 0.6 slower than Jim.  Again, though, he DNF’d with more transmission problems.  Mike Beckwith, Jim’s Normand team-mate, made his F1 debut in the Gold Cup, driving Jim Hall’s BRP Lotus 24-BRM, but Mike remembers it as an unhappy time:  “We never got the thing sorted and it all ended when the gearbox seized going into Old Hall.  I hit the bank hard.”  Mike, like Frank Gardner, was fortunately able to return to the pits on foot.

Also in the Oulton saloon car event:  Dan Gurney, driving “Jim’s” Alan Brown Ford Galaxie.  Dan, who had retired from the Gold Cup with a blown engine in his Brabham, arrived very late on the grid amidst frantic PA-calls for his presence.  He then calmly peeled open a packet of chewing gum, climbed into the car…and won from the pole.

Graham Hill replaced Sears in the Willment Galaxy and duly finished second – and Phil Middlehurst, father of Andy, was again right in the midst of it with his Cooper S.  About the first thing Andy remembers, as a baby in a pram at Oulton, is staring at the rear light cluster of a factory Lotus–Cortina.  Last weekend, at Goodwood, Andy, still obsessed with mid-1960s Lotus, debuted his stunning rebuild of Jim’s 1966 US GP-winning Lotus 43-BRM.

60,000 people watched the racing at Oulton:  it was another of those classic, brilliant, British motor racing days at one of the all-time great circuits. Old Hall, crammed with spectators, was cambered, quick and very conducive to four-wheel-drifts. Or you watched from further down the hill, on the approach to Cascades, where you could see the cars plunge into the left-hander – or accelerate away over in the background, down the straight, noses dipping as they flicked through the gears. The mist rose in the early mornings at Oulton; the light flecked through the trees. The aroma of high-octane fuel mixed perfectly with the gentle flavour of English parkland. The drivers gathered around the Esso caravan in the paddock for cups of tea and a sandwich. The team transporters were parked in natural but logical random. Flags flew.  And, In a field nearby, the makeshift runway ran diagonally, giving maximum length for take-off.

Jim, Colin and Dan flew from it in Colin’s Piper Aztec, narrowly missing the trees as the engine thrashed away.  From Heathrow, they flew on to Toronto, where they transferred to a Ford company plane for the ongoing flight to Newark.  The following day, Sunday, despite the full programme of Oulton, despite the trans-Atlantic flight and all the connections, Jim and Dan would be racing Lotus 29-Fords in the Trenton 200.

Captions, from top:  Jim glides the 25 through the Esso Hairpin at Oulton Park.  He won the Gold Cup with impunity; the full version of the Esso film made before, and during, the Gold Cup meeting;  photographer Max Le Grand peers down at Jim as the Lotus 25 prepares to exit the Esso Hairpin; the nose dips as Jim squeezes the brakes between the autumn leaves; Jim exits Lodge Corner in the Normand Lotus 23B.  On this occasion he wore his Bell Magnum, creating a very different look from the April meeting at Oulton; Jack Sears and Trevor Taylor stunned the crowd with their new Ford Lotus-Cortinas; Dan Gurney won the saloon car race overall with “Jim’s” Alan Brown’s Ford Galaxie Photographs: LAT Photographic, Peter Windsor Collection

With grateful thanks to Cedric Selzer, whose new autobiography contains many Jim Clark gems. Cedric has published the book himself, with proceeds going to the Marie Cure Cancer Care Charity. It can be ordered on-line or via good bookshops