Weekend of a Champion: F1 in the raw 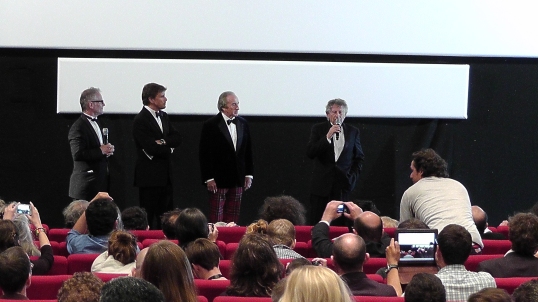 There have been very few F1 films like Weekend of a Champion – films in which one of the world’s best directors has been invited inside our sport to do with it what he wills.  Roman Polanski played the role of that director at Monaco, 1971.  He met Jackie Stewart socially, he became captivated by the man’s aura…and so he made a film about him.  At Monaco.  Over a race weekend.

The result, in my view, was brilliant.  We see Jackie and Helen Stewart in their hotel suite, chatting about Jackie’s shaving or his lack of appetite.  We see the always-cool Editor of l’Equipe, Edouard Seidler, walking down the famous Monaco hill with Jackie and Helen, pulling at his ever-present Gitanes.  We see Francois Cevert, wide-eyed and barritone, asking Jackie about gear-change points and ratios.  We see Yardley BRM stickers on the toolboxes of the Tyrrell mechanics.  We see Jackie talking about that famous gear lever knob with the ever-dour Roger Hill.  We see all the details that the TV feeds then – as now – never show(ed).

Weekend of a Champion was this week re-screened at Cannes (where it won an award in 1972) because it has been re-mastered and added-to.  We reach what we think is the end…but instead we see Jackie (now Sir Jackie) and Roman, in the same Hotel de Paris suite, 42 years on.  They talk about Jackie’s sideburns in the film, and about Jackie’s fear, that day back in 1971, that race day would be wet.  “The Goodyears were just so much slower than the Firestones in the wet around there,” says Sir Jackie, reminding you that not once in the original film does he speak badly of Goodyear, despite the frustrations.  They talk about the terrible death-rates of the time and Roman, quite rightly, highlights the “success” of Stewart’s campaign for safety.

Mostly, though, they have a laugh.  And this is what is so memorable about Weekend of a Champion.  Stewart, in what he now looks back as a “very trendy” time, comes over in situ as the lithe, nimble, athlete-superstar that he was.  “That is why I made that film,” Polanski told me last night.  “I made it because Jackie was this amazing driver who was also so articulate, so lucid.  He is the film.”

And so you watched the reactions of some of the guests.  I sat behind Damon Hill, who was seeing the extensive footage of his father for the first time.   “It was a bit scary seeing my Dad in that form but I loved the film.  Just loved it,” he said afterwards.  Alain Prost, too, was captivated.  “Just amazing.  It reminded me of my early days in F1, when things were also changing so quickly.”  Allan McNish, too:  “You can see why Jackie is who he is.  Even then, he was so much more than just a racing driver…”

I cornered Jackie afterwards and pursued some details:

“Nice to see that NAZA race suit again.  And the lovely Westover shoes…”

“Och no.  They weren’t Westovers.  Everyone thought they were.  You know what they were?  Hush Puppies.  I needed a bit of extra sole support because I always walked on my toes and I was beginning to have problems.  Everyone at the time said you had to have very thin-soled shoes for maximum feel but it was like the gloves:  I started to wear gauntlet gloves with much thicker palms with flame resistance.  Didn’t change my feel at all….”

“Why were you so on edge that weekend?” asked McNish at the star-bedecked post-film party.

“I didn’t know it at the time, but I had a blood imbalance that would become a duodenal ulcer in 1972.  I wasn’t sleeping well.  I was tetchy.  You can see it when I get annoyed with that photographer before the start.  That shouldn’t have happened. It was a sign that things weren’t right.”

We had a laugh about the famous scene in which Jackie and Roman, on the inside of the entry to Casino Square, watch F3 practice.  “Now he’s got it all wrong,” says Jackie, pointing to John Bisignano (who sportingly would say a few years later, “that was the end of my racing career!”).  “But he’s ok.  And so is he.  He knows doing…”

“Do you remember who that was?” I asked.

This is the film’s most prominent feature – its exposure of the warts as well as the laughs.  It is a reminder that F1 was, and is, a never-ending movie, a 24-hour, 365-day TV show in which all the players must, and should, co-operate.  Certainly this was Stewart’s philosophy of the time.  I loved, too, the post-race Gala.  Jackie and Helen are there with Princess Grace (looking much more like Grace Kelly than the podium photos ever allowed), with the Prince, with Ringo Starr and others – but so, too, are many of the other drivers of the day – the guys who hadn’t won in the afternoon.  Pedro Rodriguez.  Jo Siffert.  Graham Hill.  Jacky Ickx.  Ronnie Peterson.

“When I see that film, I just think of the romance of it all,” said Allan McNish, walking back in a late-night drizzle to fetch his car.  “They were all at the post-race party.  That was lovely to see.”

Weekend of a Champion will be re-released soon in France by Pathe and in other regions thereafter.  This latest version was Co-Produced by Mark Stewart Productions.

4 thoughts on “Weekend of a Champion: F1 in the raw”