Flat out at Imola 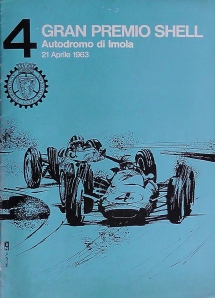 The beautiful spring weather continued as Jim and Trevor made their way to Imola via Bologna.  For both drivers, this race was a first.  Imola – running through the vineyards and orchards of beautiful, undulating countryside – was in 1963 better-known as a motor-cycle track that had seen some sports car racing in the 1950s.  There was no “Ferrari” element to it back then:  the circuit had actually been developed by the Italian Olympic Committee, based on public roads.

Nor were there any chicanes.  From what we know today as “Ravazza” – the left-hander that takes the circuit back towards the pits – Imola was basically flat-out all the way down to Tosa, the tight left-hander that leads uphill.  The road wasn’t straight, mind:  Tamborello was still a very fast left-hand kink back then and the right-hander that followed it was likewise right-on-the-edge.  There was no “Variante Alta” after Acqua Minerale – but in some ways the track gave back what it gained in fast corners by being incredibly bumpy, particularly on that climb to the top of the hill. I spoke to Brian Redman recently about his win at a pre-chicane Imola in a Gulf Porsche 917:  he reckoned that only Spa was more demanding.

The sun shone, the air was fresh – and, for Team Lotus, the opposition was again negligible.  Not even Ferrari sent cars to this Shell-sponsored race, which meant that young Italian stars like Lorenzo Bandini had to seek rides in old Centro Sud Cooper- Maseratis.   As at Pau, though, Jim’s dedication to the perfect lap – and then to the perfect race – remained undimmed.  Over two days of practice he focused on taking the kinks flat and the high-speed corners in beautifully-balanced drifts: the result was a lap in 1min 48.3 sec – an easy pole, given that Trevor lost a lot of time with gearbox trouble.

The race started relatively late on Sunday – at 4:00pm, after a Formula Junior race which featured such drivers as “Geki” (who would race for Team Lotus at Monza in 1965 and 1966) and the future Ferrari driver, Andrea de Adamich – which meant that the sun had already lost its sheen and the shadows were growing ever-longer as the tricolore fell.  Jim led from the line and was never headed – but still he found time to “play” for the crowd.  Trevor pulled into the pits at the end of the first lap, explaining again that the car was jumping out of fourth gear, and rejoined some 15 laps in arrears.  (One can understand Trevor’s nervousness about issues like this:  at Spa, the previous year, his Lotus 24 had jumped out of gear at Blanchimont, had spun sideways, and had been t-boned at high speed by Willy Mairesse’s Ferrari.  Both drivers had amazingly escaped uninjured, which I guess to some extent re-enforced the belief in the minds of most of their contemporaries, albeit in the short-term, that it was better not to be strapped into the cockpit by seat belts.  I mention this because, already, Jim had experienced the security of seat belts during Indy testing.  He wore them at Indy, and at other ovals, but never, throughout his career, would he wear belts in any European single-seater races.)

Towards the end of this Imola race, therefore, Jim waited for Trevor and “raced” him through to the flag.  Their pace, given that Jo Siffert was lying a very distant second in the Filipinetti Lotus 24-BRM, was breathtaking to watch.  Jim waved Trevor past – then shadowed him, pushing him as hard as he dared, bearing in mind that Trevor was driving now without fourth gear at all.  Taking this into account, it is amazing, I think, to note that Trevor eventually lapped in 1min 48.3sec – at Jim’s pole time (166.769kph).  So did Jim, of course – but that wasn’t the point.  The race, after all, had been fun. 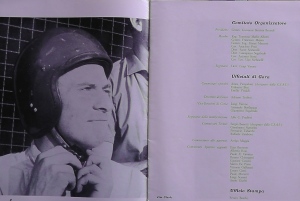 Very fortunately, we have on this occasion some colour footage from this event, courtesy of Christopher Tate, the current Managing Director of Donington Park.  Chris’s father was closely associated with the Rob Walker F1 team in the early-to-mid 1960s and thus took a 35mm camera with him to many F1 races.  Christopher notes that “it was at Imola in 1963 that Rob really noticed Seppi Siffert and decided to sign him up for 1964”.  In confirmation, of course, Siffert would go on to win the non-championship F1 race at Syracuse the following Thursday (April  25).  I love the charm of this short video – the relaxed chat between Jim and Jo Bonnier before the start; the obvious enthusiasm of the Italian hosts; the oil-smeared mechanics’ white overalls; JoBo, driving his RRW Cooper in short-sleeved polo; the straw bales, the trackside trees; Trevor waiting patiently, watching the race, while they work on his car; the elegance of the dark green Lotus 25s; and Jim looking a little embarrassed as he stands on the podium, Dunlop overalls wet from sweat.  You catch a glimpse, too, of Bob Anderson beginning to make his name in his dark blue and white 1962 Lola – and of Jo Schlesser’s sky-blue FJ Brabham.  With thanks, then, to “A Gentleman’s Motor Racing Diary”, Copyright World Action Sports Productions, available on Amazon.co.uk/DVD/Motosport.  (See below.)

Thus Team Lotus’ pre-season European interlude comes to an end.  Next race: the Aintree 200.  Again – and good to see, too – it is on a Saturday.  Next Saturday. April 27.

2 thoughts on “Flat out at Imola”